My son’s kinder class took a trip to our local fire station a few months ago. From the moment he walked in, those firefighters had my kid hook, ladder and pumper truck. So when it came time to choose a theme for his birthday, I wasn’t at all surprised when Will declared it just had to be a fire engine party. So come, grab your fire hats and jump on board for Will’s fabulous fire truck birthday – it’s gonna be a wild ride! 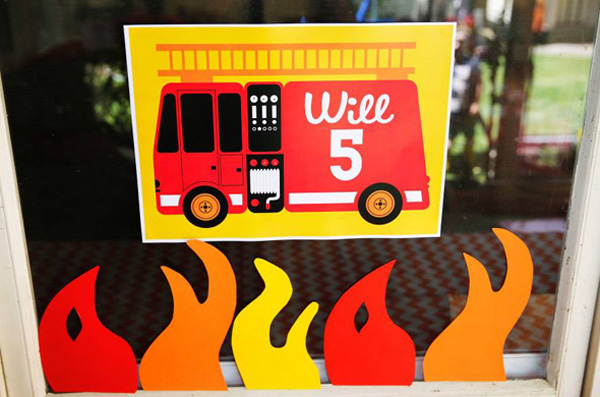 Truth be told, for all its seemingly fancy trimmings, this was the easiest party to put together – a bit of DIY cardboard flames, some fun invites and printables from Ledingham over at Etsy, some bright and cheery fabric – and presto, one fire engine party sure to wow the kinder set. When it comes to a party, my theory is that it’s the little details that help make it special. So we festooned the side path of our house with tissue paper streamers to welcome Will’s guests and set the party table with way adorable fire chief hats found for $2.50 a piece at Kmart. We even made a burning building out of an empty fridge box (below right). But more on that later. Now for the bit that everyone likes to see – the sweets table. I can tell you, there wasn’t a scrap left after we set the kids loose on it. They tucked into vanilla cupcakes, fire truck chocolates that I made using a mould like this one over at Couture Cakes, honey joys, fairy bread, layered flame jellies and more red lollies than you could shake a fire hose at. And all this after first eating their fill of homemade sausage rolls, mini hotdogs and other savouries. I made the fiery cupcake toppers using a flame image I found online. I simply printed a bunch of flames onto card, cut them out and taped them to toothpicks before using them on the cupcakes, which were also finished with yellow and orange sprinkles atop the red buttercream for extra spark.

But the favourite sweets by far were the fire truck cookies that I made using a fire engine shaped cookie cutter found at Ballarat-based Bisk-Art. The royal icing-topped cookies were sized just right for five-year-olds and I can tell you that they were eaten, right down to the very last crumb. The birthday cake was a chocolate mud layered with rich ganache and raspberry jam, topped off with a cheap-as-chips Kmart fire truck. How cheap? Only $3, thanks very much. I had planned all along to use blue icing for the cake but changed my mind on the morning of the party while assembling the cake, opting instead to make ombre flames with the Swiss meringue buttercream.  Here it is with our giant sparklers on top for the Happy Birthday bit. Look at the size of those suckers. I’m still not sure how the buttercream didn’t melt. It’s not a party without games, so we played a fun relay where the kids raced to fill tubs with buckets of water. My kid also helped me make a burning building from an empty fridge box the week before the party and we used it for a ball tossing game. I had originally intended for the boys to throw water balloons at the building but common sense won out on the day and we used foam balls instead! There was a fire truck pinata too, in keeping with my philosophy that a party is simply not a party without some usually illicit lollies and sugary sweets. But the most exciting moment of all was when Firefighter Rob turned up at the front gate, lights and sirens on, to take the party guests and overjoyed birthday boy for a fire truck ride. Seriously, have you ever seen a bigger smile on a kid? My Will looks set to burst from the sheer joy of it all. 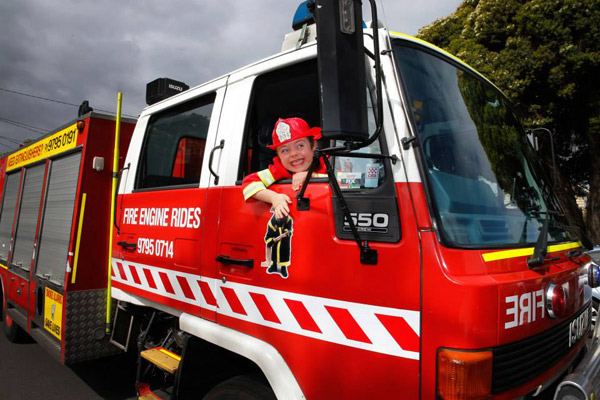 Here’s the obligatory mamma-kid shot. See, that smile didn’t let up at all. I have to tell you all, I had a tear or two in my eye on tucking him in to bed that night when he threw his arms round my neck and said “mummy, that was the best party EVER! Can I have another fire truck birthday next year?”. Naw, isn’t that why we mums do it. If you want to know how crazy I get at party time, take a look at some of the other birthday parties I’ve thrown for my kids over the years, from dinosaurs, knights and Lego to fairies and Alice in Wonderland.