A fellow motorist snapped a pic of the wheelie bin attached to the moving car – en route to the train station.

The four-wheel-drive was travelling on a busy Brisbane road and headed towards the train station when a fellow commuter spotted the wheelie bin.

It was attached to the car and the driver was seemingly unaware that she was towing her garbage bin. Oops!

No doubt a funny sight that made the commute less dull for fellow drivers, it was captured by motorist, Steve Jones.

The picture was later posted on the ABC Brisbane Facebook page.

We’ve all had one of those days!

“To the lady who forgot to offload her wheelie bin this morning at her driveway at cedar creek and instead took it for a drive to the train station…. don’t worry we’ve all had one of those days.”

Then is followed up with this P.S:

“Don’t worry, folks. Steve tells us he and another motorist managed to eventually catch up to the driver and tell her about her predicament”.

Commentators on the post were quick to reassure the anonymous driver that they could have easily made the same mistake.

“I can see how this would happen,” one wrote.”

“Omg I could see me doing this,” added another. 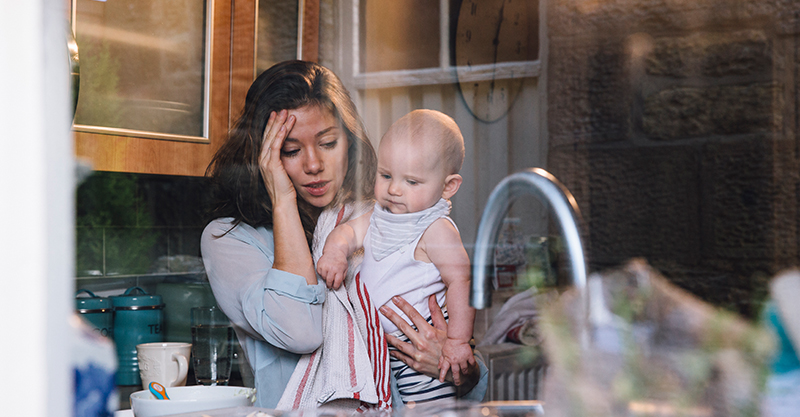 Did she have baby brain?

While we don’t know if the woman is a new mum, we can’t help but wonder if she is. Because if so, this wheelie bin incident could be explained.

Sleep deprivation coupled with baby brain fog can make a new parent do any number of silly things that we wouldn’t have done pre-kids.

For me, I’m thinking of the time I let the kitchen tap run full pelt and had a nap with my baby – for two hours – whoopsies. Or finding the cereal box in the fridge and the milk in the pantry. Not to mention the number of times I’ve searched for the keys, only to find them still in the front door lock.

So driving off with a garbage bin accidentally attached to the car is totally understandable if she is suffering from pregnancy, baby or mum brain (cos in my experience, this sort of forgetfulness doesn’t go away when the baby grows up), we feel.

One commentator, it seems, thinks it might be a case of mum brain at play.

“I do the same but with my children and have to drive back to the school. I can be having a full on conversation with them and still forget to drop them off at school ??” she writes.