Life with a kid who suffers from car sickness, or any kind of motion sickness, is a special kind of hell for parents. And with one in three people suffering from motion sickness when travelling, that’s a lot of us!

Not only do you have to deal with your sick child who is pale, clammy and feeling terrible, there’s often also a clean-up involved before you can be on your way again – for both your child and your car. And possibly yourself, too, if you’re supremely unlucky – as I have been (yes, ewww).

Road trips become fraught with the fear that at any moment, you’ll hear a little strangled voice pipe up from the backseat: “Mum, I think I’m going to be -” – and by this time, it’s usually way too late. There’s not much worse than the smell of vomit permeating the car (or your hair) for the rest of the trip.

All about motion sickness

Motion sickness is known to occur in all kinds of situations where you find yourself stationary while the world moves around you. Travel in cars, buses, trains, boats and planes can all trigger severe nausea in motion sickness sufferers. It can also occur on rollercoasters and other amusement rides as well as when watching movies, particularly on large or 3D screens.

Motion sickness most commonly affects children from 2 to 12 years old, pregnant women, and people who are prone to migraines, but it’s not really understood why some people are more susceptible than others.

According to Better Health Channel, “In part, motion sickness is thought to take place when there is a mismatch between the information that the brain receives from the inner ear balance mechanism (vestibular system) and what the eyes ‘see’. For example, if the eyes tell the brain that a person is stationary (such as looking at the interior of a cabin on a ship), but the vestibular system senses head movements (due to motion of the ship), then this is thought to cause a mismatch of messages to the brain and leads to motion sickness.” 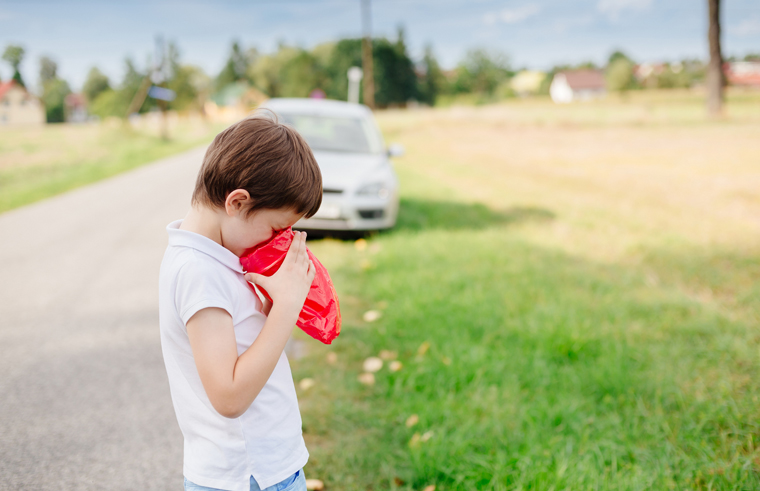 “About 1 in 3 people are considered highly susceptible to motion sickness,” says Genetics Home Reference. “However, almost everyone will become motion sick if exposed to motion that is intense enough.”

Tips for travelling with a car sick kid

Travelling with a child who suffers from car sickness requires a lot more planning – from extra travel time and careful consideration of your route, to having a stash of vomit bags and clean-up equipment at the ready.

And knowing a few of these tried-and-tested tips from parents and professionals can help, too.

If you have the choice between a twisty, hilly, scenic ‘back road’ and a nice smooth highway, take the highway. While it may be a prettier journey via the countryside with less traffic, the winding and often untended and bumpy back roads can be a quick trigger for car sickness. The flatter, straighter highway also gives you more opportunities to stop at a roadside service centre for a clean up with running water at the ready, if necessary.

2. Stick to light snacks rather than meals

Don’t give your child spicy or greasy foods or a large meal immediately before or during car travel. If the trip will be long or your child needs to eat, offer a small, bland snack — such as dry crackers and a small drink — and consider stopping for a break while you eat.

Encourage your child to look at the stationary horizon outside the car rather than focusing on books, games or movies, or the world moving around them. Travelling during nap times or at night time when they are more likely to sleep can also be helpful.

Adequate air ventilation might help prevent car sickness, so try opening the windows to allow some fresh air to flow. Try to keep the air clear of any strong odours, too.

The art of distraction can work wonders! If your child is prone to car sickness, try distracting them during car trips by talking, listening to music, singing songs or playing games that keep their brains busy.

Stop frequently on your trip to recalibrate your little one’s brain and senses and get some fresh air – yes, you will need to plan for a bit more travel time. If your child starts to feel unwell, stop the car as soon as possible and let them get out and walk around — or have your child lie on their back for a few minutes with closed eyes. Placing a cool cloth on your child’s forehead also might help. If you’re at the point that you are stopping because they feel ill, don’t rush them back into the car the minute it has passed. You’ll get a lot further in your travels if you leave it to your child to signal when they’re ready to hit the road again.

Try to make sure your child faces the direction you’re travelling – this may help the disconnect between the visual sense and the inner ear. On boats or ferries, try moving from the rear to the front of the boat. Some people report sitting in the front seat in cars, planes or buses reduces symptoms, however for children too small for the front seat of the car, try the middle back seat so they can see out the front window rather than the side windows.

An acupressure point along your wrist called the nei-kuan may give quick relief. Place the index, middle, and ring fingers of the right hand on the inside of the left wrist, starting under the crease. Your nei-kuan point is underneath your index finger, between the wrist tendons. Apply firm pressure on one or both wrists for four to five seconds. Acupressure bands, available from the chemist, stimulate your nei-kuan point continuously and many parents report that these are effective for their car sick kids.

Ginger products such as ginger ale, hard ginger lollies or ginger nut biscuits reportedly provide some relief from nausea associated with motion sickness, although research has not demonstrated a clear benefit. Many parents (and morning sick mamas) swear by it, though!

If you’re planning a long car trip, ask your child’s doctor about an over-the-counter medication to help prevent car sickness. Most medications work best if taken about an hour before travelling. Read the product label carefully to determine the correct dose and be prepared for possible side effects, such as drowsiness. Most anti-nausea medications are not recommended for children under the age of two. The theory is that strips like this prevent static electricity from building up on the car body, reducing radio interference, electric shocks when you open the doors, and car sickness. Some people report that they have helped, but there’s no scientific evidence to show that these actually help with car sickness.

12. Newspaper under the seat

This is a quirky tip, we know. Shared by a Babyology reader on our Facebook page, Billie-Jane says, “A friend of mine swears by placing newspaper under the car seat. Her children were always getting sick even on short trips, but she swears this works.” This sparked agreement from a number of other parents, so we thought it worth sharing, too! Parents of car sick kids will agree that ANYTHING is worth a try.

And lastly, be prepared

For some kids, car sickness is just inevitable no matter what you try – my daughter is now 15 years old and still suffers every time we travel for longer than half an hour. I’ve learned that being prepared is essential.

Here are my personal top tips for being prepared when you travel with your car sick kiddo: