There’s something about being in a car with their siblings that makes kids go BANANAS. You don’t even have to be on a long trip, just ducking out to the shops can create enough mayhem to almost run you off the road.

Fear not, however! These simple tricks could be just the ticket though to banish your backseat bickering for good.

Before you head out the door, remind your kids that driving requires a lot of careful attention and that when everyone makes lots of noise it’s hard for mummy to concentrate, which can be unsafe. It’s best to do this before you get in the car, as there’s no way you’re going to be able to say this calmly while World War III is happening behind you.

Let your kids know the consequences if they misbehave and break the family “car code of conduct” – perhaps it’s no screens for the rest of the day, or a reward chart system for every fight-free car journey?

Even a ten minute car ride has time for a bit of I-Spy or I Went to the Shops. Counting cars is another good one, or Spot what? (i.e. first person to see something – like a motorbike – wins.) Any time they’re focused on a game is time they’re not screaming or prodding at each other right? And don’t forget there’s also the genius Quiet Game – “Who can be the quietest for the longest?!”

3. Whack on the tunes

Drown out that kiddie car chaos by flicking on the radio or your favourite track – and make sure it’s turned up LOUD. Not only will it take over the airwaves so you can’t hear their petty squabbles, but they may just be shocked into silence or want to sing along too. “Who runs the world?” 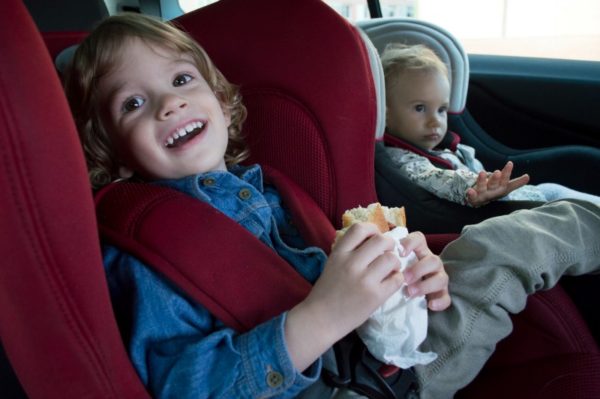 No one likes to be hangry, especially when they’re cooped up in a car with their pesky family. Before you buckle everyone in have a think – are they due for a snack or do they need a drink?

If you’re unsure then load them up (on healthy stuff – not sugar madness) before you hop in because full tummies make happy kids. Or let them eat while you drive (if old enough), they’ll be too busy munching away to notice what everyone else is or isn’t doing!

Never, EVER, underestimate the power of distraction. It can stop a wailing child headed for a nuclear meltdown dead in their tracks – and save their exasperated mumma from losing her sanity and her grip on the wheel. Distract with chatter about what’s outside or by telling a funny story – or revealing a surprise toy or treat in the car.

This one is GOLD. As soon as the fighting starts, instead of shouting at them twenty times to be quiet, simply and calmly pull over to the side of the road. And stay there. For as long as it takes for them to shut the hell up!

As soon as it all goes quiet, it’s on with the show. And if they dare create a hullabaloo two minutes later? Well then it’s over to the side again. Who cares if you’re late for whatever you were heading to, they’ll soon learn you mean business.

If all else fails, then you can try separating your little monkeys so they can’t touch OR see each other when they’re in the car – just like this clever dad did. Genius!

How do you stop backseat bickering in your family car? Share your tips with us on Facebook.