With so many children’s entertainment programs flooding our TV screens, our kids are frequently getting attached to new shows and fave fictional characters all the time.

One widely popular children’s show has caused a bit of a stir on Reddit this week after a user uploaded a post about his recent interaction with other parents about none other than Peppa Pig.

“So I was at a BBQ and I ran into a parent who doesn’t let their children watch Peppa pig because Peppa is too rude. Apparently, the way she speaks to her parents is disrespectful,” the post read.

“This is now the 4th time this year I’ve had another parent say their kids are banned from watching it.”

Confused about why others are hating on the much-loved TV show, the parent admits, “I love Peppa Pig.”

“It is the only one of my kids shows I’ll enjoy watching with them and it’s their favourite program. I think the humour in it is aimed at adults just as much as kids.

“From my perspective, Peppa is a little cheeky at times and has disagreements like all children. But she is never openly disobedient or nasty. Her parents make mistakes and are silly sometimes which is what happens in real life. Parents aren’t perfect monoliths who should never be spoken back to and I think it’s good to see that adults aren’t perfect just as children aren’t.

“But anyway guys, what gives? It’s clearly an issue for some parents if I keep running into people who dislike it and even won’t let their kids watch it.”

“My daughter actually picked up some good habits”

The post received mixed responses from other users of the site.

Some agreed with the comments, with one parent saying her daughter actually learned a thing or two from Peppa.

“I like Peppa. My daughter actually picked up some good habits, like apologizing and saying thank you and please.”

Another family went as far to name their pet after her.

“We love it so much our cats named after her! I feel like she acts like a normal kid but I know a lot of people think of her as rude,” they said.

Another parent was surprised by the negative reactions to the post.

“I’ve also been very surprised with some parents reaction to Peppa. I love that show! I can watch it with my son over and over and not feel like banging my head against the wall (the other show I love is Sarah & Duck).

“That whistling episode with Suzy is hilarious! And Peppa is supposed to be 4 years old, I think. Children can be very, erm, direct at that age. It doesn’t mean they are being rude. She’s cheeky and sometimes not very nice, but she’s not evil or bad on purpose. And the funny thing is that, for all her comments about daddy pig, she is very much like him!”

“She’s rude and she fat shames her dad”

Yet, on the opposing side of the argument, others told the parent what they really thought – and there was no holding back.

“She’s rude and she fat shames her dad in every episode,” one person shot.

Another added: “Banned in my house for body shaming.”

Regardless of what the parents think, there’s no denying the cheeky pig’s popularity among kids. *Snort* 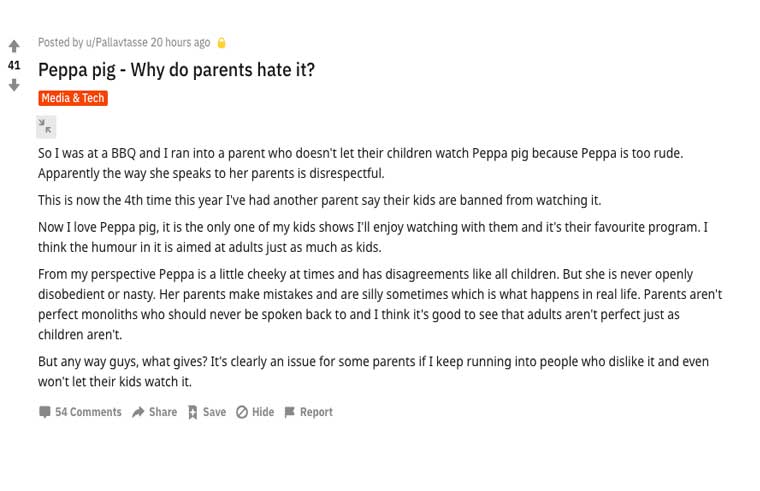