Forget about Bambi, the saddest movie moment of our childhoods was Dumbo the flying elephant being torn apart from his mum and forced to be a circus clown. We thought it couldn’t be topped but now the epic new live-action remake teaser has dropped and well, you may as well rip out our hearts because we could in fact now be dead.

The original 1941 Walt Disney cartoon flick Dumbo was a classic. It was so cute and magical with wonderful messages about friendship, being different and believing in yourself but OH MY GIGANTIC EARS was it a tearjerker. That scene where they lock up Dumbo’s poor mama for being ‘crazy’ (what mum wouldn’t go completely nuts to protect her child?!) and Dumbo visits her and they touch trunks through the bars and that song Baby Mine is playing… WAAAAAAH!

And now movie magic maestro Tim Burton (Edward Scissorhands, Alice in Wonderland, Charlie and the Chocolate Factory) has decided to up the ante by injecting some even bigger feels into every person on the planet by remaking the film into a live-action piece with real actors (like Colin Farrell, Danny DeVito, Michael Keaton and Eva Green), and a CGI elephant. The trailer just came out and seriously, we can’t even deal. The word emotional doesn’t even cut it. 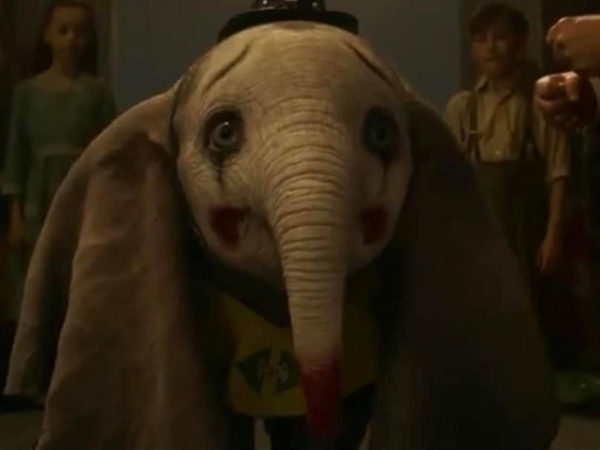 For starters, we get this heart-wrenching picture of little Dumbo in his clown get-up. SADDEST. CLOWN. EVER. Unlike the original film though, the animals don’t appear to talk and instead the humans help drive the story. So, unfortunately, it looks like Dumbo’s mate Timothy Mouse has a very minor role. Instead, two children are the baby elephant’s friends and helpers. The circus animals and performers all look amazing though and of course, there’s Dumbo with his magic feather and we get to see him do a bit of flying. While exploitation threats lurk in the air and his mum gets taken away AGAIN, there’s also a haunting new version of Baby Mine which plays over the top. SOB!

Okay, enough chit-chat. Here’s the trailer so you can see for yourself. And yep, there’s a good chance that after watching it you’ll be scared you won’t be able to handle the whole film, but the release date is March 28, 2019, so you do have a bit of time to prepare yourself emotionally. But, let’s face it, we all know we’re going to bawl our eyes out anyway. Get us some more tissues already!!