Written by Kim Kane and superbly illustrated by Sara Acton, Esther’s Rainbow tells the charming story of a little girl who discovers a rainbow hiding under her chair one morning. Intrigued, Esther begins hunting for the rainbow and in doing so discovers all its colours in the most unusual places.

“On Sunday, Esther saw red in raspberry ice, in the warm bricks of the garden wall, in the fins of a fish…” She also sees orange in a duck’s beak, “…heard blue in the echo of the pool…” and ‘smelt’ green as she crushed mint in the garden. Wow. Kane and Acton manage to make colours a sensory experience (which indeed they are). At the same time, they draw attention to all of the tiny details that little children notice, whether it be the yellow of pears in a tree or the violet of a bruise on a knee.

The text moves through the days of the week, each colour of the rainbow and the senses – it has enough repetition to generate eager anticipation but Kane’s charming observations and Acton’s beautiful water colour illustrations make this book anything but predictable. All of this coupled with a delightful ending – it’s a perfect picture book in every way.

Esther’s Rainbow is suitable for children aged three years and over. Find it in all good bookshops or online at Fishpond. 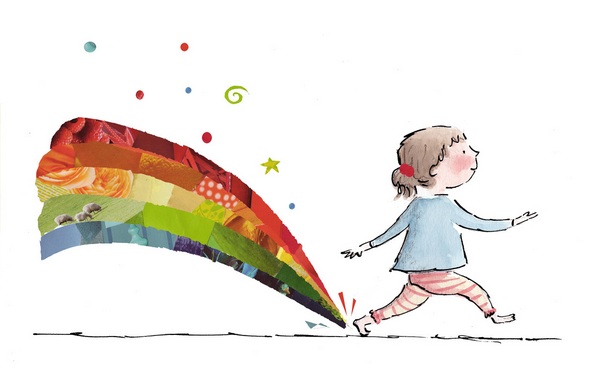