Stories with a diverse range of characters are great for teaching kids tolerance and acceptance, and for normalising families that may look different from their own.

But should a long-running kids’ program like Peppa Pig be targeted as the show to achieve this?

Many people think so.

A petition has been started on Care2, demanding that the show introduce same-sex parents into its narrative, and it’s gained a lot of support in a short amount of time.

“The show features Peppa Pig and her family, and various families of other animals they are friends with,” the petition reads. “However, despite there being six series and over 250 episodes produced so far, none of the families feature same-sex parents.”

“Children watching Peppa Pig are at an impressionable age, and excluding same-sex families will teach them that only families with either a single parent or two parents of different sexes are normal. This means that children of same-sex parents may feel alienated by Peppa Pig and that other children may be more likely to bully them, simply through ignorance.” 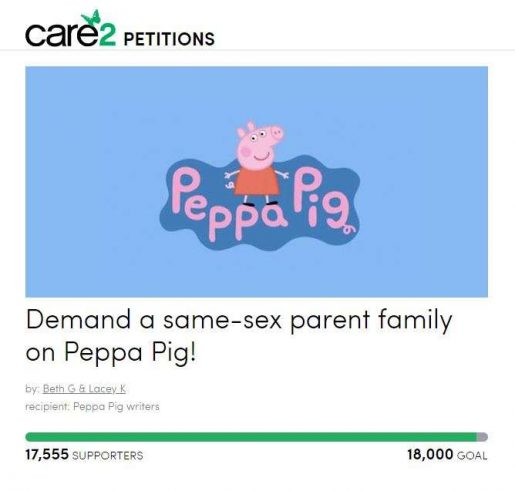 Does every show need to be everything for everyone?

The petition definitely has a great sentiment. Same-sex characters would go a long way in helping kids without the “one mum, one dad” family formula feel more represented and understood – but do we need to single out Peppa as the show to lead this movement?

Does every show need to do everything for everyone? Why not any other show? Or a new show? After all, the road to equal representation for diverse families is a slow one, but we’re frequently seeing promising steps forward.

These are all great strides forward for diversity. And who knows, maybe a same-sex couple are the next characters on the agenda for the Peppa Pig writing team.