If you thought you could guess what happened during a baby’s first weeks in the Kardashian-West home, think again!

Kim Kardashian has taken maternity leave now that her fourth child has arrived. Her baby was born with help from a gestational carrier, but is Kim and husband Kanye West’s biological child.

The little boy – whose name has yet to be revealed – has been described as “perfect” and “chill” by his delighted mum. She also told followers that her newborn was daughter Chicago’s twin and that the whole family is besotted with him.

What we do on maternity leave….
Directed and Choreographed by North ? @lilnasx pic.twitter.com/DsM6GGTbrc 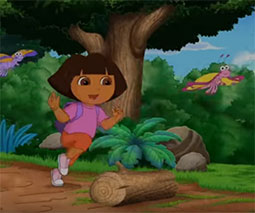 5 brilliant things my kids learned from Dora the Explorer

“What we do on maternity leave”

The Keeping Up With The Kardashians star shared a music video which features young North (and a brief cameo by her mama) dancing like nobody’s watching to the Lil Nas X’s Billy Ray Cyrus collaboration Old Country Road.

“What we do on maternity leave,” Kim posted on Twitter alongside the clip, tagging Lil Nas X.

“Directed and choreographed by North,” she noted.

North is dressed like a tiny hip hop Toy Story cowgirl, busting out some bold moves she no doubt learned from her dad, but has gone on to make her own.

It’s not North’s first rodeo with Lil Nas X. Photos of the eldest Kardashian-West child having an encounter with the rapper at Coachella went viral recently too, mostly due to North’s unimpressed mood.

“north was not feeling me,” Lil Nas X admitted in a recent tweet and the internet was delighted.

north was not feeling me

Turns out North’s ‘mood face’ was not disapproving. It was simply evidence that the tiny creative genius was already conceptualising her surprise music video, and mulling over a marketing plan.

Lil Nas X was as thrilled as the rest of us.

“update: north may feel me just a little lmao,” he just posted on Twitter. Phe-ewww!

update: north may feel me just a little lmao https://t.co/XjfkuJ6vsh