Ahhh the Playschool windows. Swoon. Waiting for the part of the show where the windows came into view was an essential part of childhood, as was guessing which one the show would be ‘looking through’ today.

Some kids had a favourite (that’s me, and it was the arched window) while others took the wild approach of hoping for a different shape every day (adrenaline freaks!)

If you haven’t ever watched the show (thoughts and prayers) then let me tell you this – Playschool is an iconic children’s program that began screening in Australia in 1966. In fact, it’s our longest-screening kids’ TV show. #funfact

The much-loved Playschool has a regular segment where boisterous children have the opportunity to settle the heck down and watch some footage of an interesting and often everyday thing. It might be a family going to the beach or a postman delivering letters or someone washing their dog. It was engaging and calming and allowed us to make a little more sense of the world.

This segment originally began in front of three lovely big window props – a round window, a square window and an arched window. We all wished we had those windows in our house. This is what they looked like. The Square, Arched and Round windows were a regular feature on Play School until a set redesign in 1999. Play School collection, National Museum of Australia

The presenter of the day would stand in front of the windows, have a little chat to us and then some very magical music would play. The camera would zoom in on that day’s special window and then the ‘interesting thing’ footage would begin to play to thousands of children sprawled on living room floors around the country.

Guessing which window would be looked into was a rite of passage for lots of children, as was making the correct choice when your sibling didn’t. #SuckedInSean

(Head to the 18-minute mark of the clip below to look through the windows again, for old time’s sake.)

As Playschool ‘moved with the times’ the windows were ‘upgraded’ and replaced with digital versions. Not only that, instead of three windows, the digitised version sized-up to FOUR. 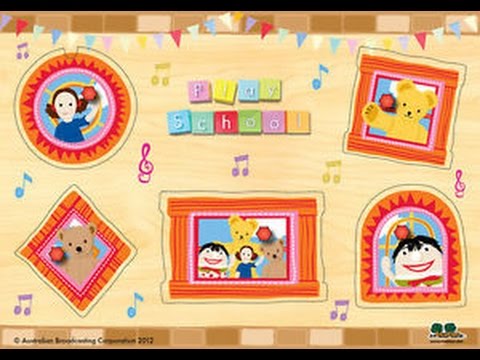 “Firm in her belief”

This introduction of a diamond window was unexpected – and we now know that OG Playschool presenter Benita Collings is not here for it.

Just in: Benita is not into the current FOUR playschool windows, believes it should have remained as THREE playschool windows. Cites the three blind mice as evidence that three is a good number. Firm in her belief. pic.twitter.com/KEv51Vv6ws

“Just in,” Sally tweeted. “Benita is not into the current FOUR Playschool windows, believes it should have remained as THREE Playschool windows. Cites the three blind mice as evidence that three is a good number. Firm in her belief.”

Yup. In one tweet. In a world gone mad. In a world where progress meant adding a window where a window was not needed, Benita has slowed the roll and provided some no-nonsense perspective and let’s face it … HOPE. Benita Collings was my fashion hero

People on Twitter were as relieved as I am about Benita’s big reveal – and perhaps you feel similarly?

“Never a truer word spoken,” Twitter user Jessica responded. “What a farce. The thrill of correctly guessing the window now made even tougher for our young people. Disgusted.”

“Hang on, there are four windows now?! Why fix what isn’t broken?” a very shocked @ThatGirlSera posted.

I felt the need to breathe into a paper bag when I found out too, @ThatGirlSera. “Well if Benita’s not having it, I don’t want it,” another Jessica commented while someone called Chantal simply wrote “#IStandwithBenita” and GOSH THIS. Benita was Monica’s fashion hero, too.