Mat and Denise Brajkovic are grieving the loss of their little boy who died just six days after his birth.

Content warning: This story discusses the loss of a child.

Tiny Julian passed away after contracting a strain of enterovirus while still in utero.

Enterovirus is thought to be one possible cause of stillbirth, and if passed on to a baby in utero it can clearly be fatal.

Denise was 35 weeks into her pregnancy when she got very sick. She initially thought she had caught the flu, as the symptoms she was suffering were quite similar.

Understandably worried about their growing baby’s wellbeing, Denise and Mat went to the hospital to make sure their baby was okay. 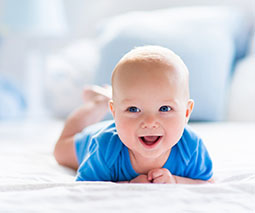 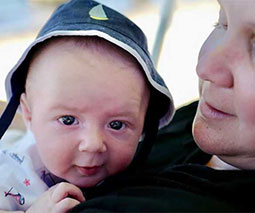 “Mat and I were concerned about Julian and I went to the hospital to have the baby checked and myself. They did blood tests and urine tests and everything came back ok. The baby was fine. I was discharged and told to rest and take Panadol to control any fever.”

But we know now that everything was not fine.

Denise actually had a strain of enterovirus – called echovirus – and it had been passed on to baby Julian. He was born with the virus in his system, and without the required immunity to fight it off.

But sadly nobody realised this at first.

Julian seemed well, was feeding happily and obviously doted on by his brilliant parents. But things went downhill very quickly as the virus took hold.

“On day 3 the virus started to take hold unbeknownst to any of us, including the medical staff,” Denise writes.

“Symptoms were masked under typical newborn behaviours. He was a bit grizzly and didn’t really want to feed as much. I asked the nurses and doctors if this was ok, and they assured me it was normal. Deep down inside I didn’t have a good feeling.”

Julian got sicker and sicker, and he died when he was just six days old.

“We got airlifted to Westmead Children’s Hospital to the Infant ICU Grace Ward,” Denise explains.

“A doctor immediately recognised what Julian had Echovirus 9. Rarely contracted. Deadly to infants. No cure. No drugs that can save him.”

“Mat and I then had to make the most unimaginable decision to have our son taken off life support. Julian died in our arms a little while later.”

This lovely couple are obviously devastated, but they’re also determined that their son should have a lasting legacy. They’re now spearheading an awareness and information gathering campaign under the hashtag #1isenough in a bid to save the lives of other vulnerable newborns.

“One is enough,” a grieving Denise later told 7NEWS.com.au.  “We shouldn’t have more babies dying from this virus.”

#1isenoughPLEASE SHARE THIS Dear Friends. Two months ago we welcomed our beautiful baby boy Julian into this universe….

“We want to spread awareness”

Julian’s parents are hoping to educate other parents about viruses like the one this little guy battled. To let them know that these sort of illnesses can be passed from mum to vulnerable baby during those final weeks of pregnancy.

They’re also building a database of other families whose babies have battled dangerous viruses they’ve been exposed to prior to birth. Their campaign is now rolling out on Facebook.

“We don’t want to create mass hysteria but we want to spread awareness,” Denise told 7NEWS.com.au.

But the family are concerned that warnings about the dangers of exposure to viruses like this seem to be non-existant.

“I’ve had another child and I’ve known lots of pregnant mums … and they never warn you about it.” Denise said.

Thank you to everyone who keeps sharing our story. We have had 21 people come forward this far with confirmed…

Most people infected with Echovirus have no symptoms. If an infected person does develop symptoms, they’re typically mild upper-respiratory symptoms, such as: a cough, a sore throat, flu-like symptoms, a rash and croup. Viral meningitis can be another symptom of Echovirus. It can cause symptoms such as fever, chills, nausea, vomiting, sensitivity to light, headaches and a stiff neck. – source.

“The way to stop it is education and mitigating risk,” baby Julian’s dad Mat told 7NEWS.com.au.

“Like pamphlets to communicate to mothers to make them more aware that there are steps you can take to reduce your risk.”

“They tell you not to drink alcohol or smoke or get the whooping cough vaccine. But they never tell you there’s this thing called Enterovirus,” Denise said.

“Not at any point do they tell you ‘hey, if you present with these type of flu like symptoms you could be infected with Enterovirus and it kills your baby’. They don’t test for it.”

“A simple swab test could have been done and perhaps then my Doctor and I could have made an informed decision to keep Julian in utero for as long as we could to give him a chance to receive the smallest bit of immunity. Even if it represented an extra 1 percent chance of life for him, we would have taken it – and we believe every other mother or father would do the same.”

Our thoughts are with this family and their loved ones. We’ll be keeping a close eye on this excellent campaign.