Every night I try to make my boys nutritious dinners (well, most nights; I’m not a supermum). But after doing dinner battle with them, I’m always left with an uneaten veggie (or three) to scrape off their plate, or nibble myself in anger as I stack the dishwasher.

You see, while I have the best of dinner intentions, that uneaten veggie reminds me that I live in a fantasy world of what I THINK my kids should eat and what they actually do. Let me explain.

I go by thinking that we, kids included, need to eat a variety of food to get all the nutrients we need to like, live. My boys on the other hand believe only eating ONE thing on their plate constitutes having dinner. While I use every trick in my book to coax them into eating some of everything, it’s inevitable that I am left standing at the end of dinner time feeling utterly deflated. Their idea of a food rainbow is one that is white (carbs) and red (tomato sauce).

The thing about the cold piece of broccoli that’s left abandoned on the plate, is that it was served up not because it’s paramount that my kids eat it for dinner, I mean they are not going to die if they don’t, but because it makes ME feel good for at least trying. When it remains uneaten though, well, it’s a slap in the face.

I know I’m a good mum. I’m trying my very, very best but that effing uneaten veggie, makes me feel that when it comes to giving them good nutrition, I’m failing my kids. They are picky. But they are also pretty normal, I think. Somehow that doesn’t make me feel better, though. I just want them to eat all their dinner. Is that too much to ask of a fussy preschooler and toddler?!

The other reason the uneaten veggie torments me, is that I know I will only get a nibble if I have used it as bribery – “you are not getting a Peppa Pig yoghurt unless you at least take a bite of your broccoli!” – and not because I am instilling good eating habits in them. Sigh. 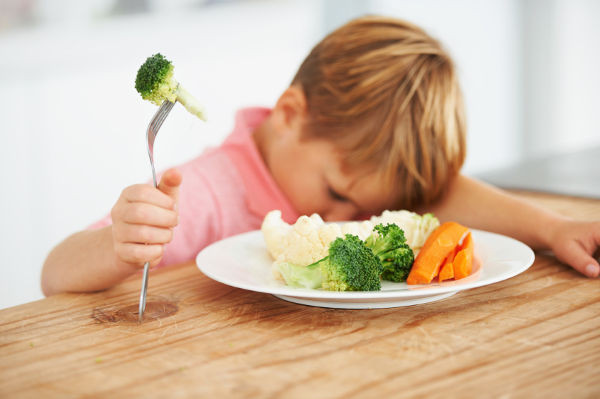 5. It reminds me that I’m not a good cook

I make healthy meals that are aimed at fueling my kids rather than thrilling their taste buds, and maybe this is where I go wrong. I know I’m not the best cook. That uneaten veggie reminds me that maybe if I was a bit more gifted in the kitchen I could mask it in some delicious flavours my kids might like to eat.

6. It means I have to keep being sneaky

When the uneaten veggie remains on the plate, I know I have to get better at my ‘sneak those veggies in’ tricks. This means my days of making green smoothies for the boys, and hiding the flavour with blueberries, is not behind me. Why can’t they just eat their damn veggies?

Please tell me I’m not alone in being trolled by the stupid uneaten veggie!