Your baby’s first word, once said is hard to forget. It feels like you’ve just witnessed your child taking a giant leap forward. Even if sometimes you find yourself wondering if they meant to say it, or if it was an accident, or simply a burp.

The mystery around how a baby learns their first word started being solved a few decades ago when early child linguists and researchers began focusing on the importance of ‘baby talk’ and how that silly way adults talk to infants was actually doing something really important.

Now BabyLab, a new podcast from Babyology, created in collaboration with Western Sydney University, is digging through the science to answer all the questions we have about how babies learn to communicate.

It all starts before birth

Dr Karen Mattock, a researcher at MARCS Institute for Brain, Behaviour and Development, explains how babies begin this process of learning to decode sound into language from surprisingly early on.

“The origins of language, and how a baby learns language, really starts before birth. So from the third trimester, the baby can hear in the mum’s womb,” Karen explains. “It sounds really muffled so they’re not hearing the exact speech sounds, but they’re hearing the rhythm and intonation. And that’s really their first insight into language.”

Listen to the full Origins of language episode on BabyLab:

Which means that by the time they are born, babies have already had three months of becoming aware of, and tuning into, language. Sure, it’s not how people speak in the real world, but this exposure to rhythm and pitch prepares them for language.

“How parents interact with children – and how children interact with parents – forms the basis of language development,” Denis Burnham, Research Professor of Speech and Language at The MARCS Institute says. 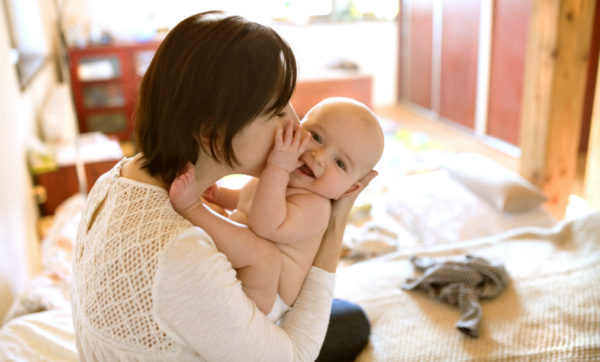 From his research, Denis thinks that this subconscious exaggeration of vowels is one of the primary ways we have to teach language. By emphasising vowel sounds through infant-directed speech – the technical term for ‘baby talk’ – we give important clues to the beginning and ends of words, and also the particular rhythm of our native language.

Baby talk plays a big role in ‘tuning’ babies’ ears to pick out and focus on the distinctive sounds of their particular native language.

“Around about four months, infants begin to realise there are particular sounds they hear in the world around them, and they don’t hear other sounds, so this is ‘perceptual attunement’ is like ‘tuning’ into something,” Denis explains. “So what we do as infants is narrow the focus of our attention to those sounds that are used most in our language.”

This ‘tuning’ process that happened when we were babies explains why as adults, we might find it harder to learn a new language – especially one like Thai, or Mandarin that uses tones and other sounds that we don’t use in English. Because we didn’t hear adults around us using those features when we were growing up, we lose the ability we’re all born with to hear all the subtle differences, so that we can be more efficient and get on with learning our home language.

“The use of language does separate us from every other animal in the world and we use language symbolically, so we use it as a symbol to communicate ideas about the world.” Dr Karen Mattock says.

“We’re the only beings that use language in the way that we do. So there’s some evidence that to some extent, non-human primates like chimpanzees can use language, but it’s nowhere near as remarkable as how many symbols the human infant learns for language. So there’s something in the human brain that is hard-wired before birth to learn language.”

“I think it’s really important to study how infants learn language because it’s so important to life. I mean can you imagine a world without language? It really is the window to learning everything about the world. From bonding with other people, to developing friendships, to sharing and learning in life. It’s so important.”