Nothing can induce a collective shudder among fellow parents quite like the phrase ‘separation anxiety.’ While this stage is undoubtedly challenging, it’s also an integral developmental milestone for our little ones and a strong indication that they’re beginning to recognise that they exist independently of you (Bless!).

However, with this new awareness – which can start as early as when your baby is five or six months old – comes the need to feel reassured that they are still safe even when they can’t see you. Recognising when they need this reassurance can help ease this tricky stage, so here’s what to look out for.

Your baby bursting into tears when handed to someone else is the most obvious sign, but did you know that waking multiple times throughout the night could be an indication that your little one is suffering from separation anxiety? Quite simply, she cries out in a panic because she thinks you might have done a moonlight flit and left her all alone and defenceless.

This can be exhausting for you both, so having some kind of nighttime troubleshooting routine in play will ensure you both get a bit of shut-eye when separation anxiety inevitably strikes. Keeping your baby close and relaxed in the lead up to bedtime can offer her the comfort she needs to drop off. While visiting her at her cot throughout the night as many times as you feel is necessary can help soothe her anxiety – remember to keep these visits brief and un-stimulating so she can easily fall back to sleep. Leaving something in her room that smells of you (this could be as simple as a t-shirt or spritz of your perfume) will reassure her that you’re still nearby.

You might have put her early morning wake up calls down to the clocks going forward, light streaming through the window or even the dawn chorus of the birds. However, if your bub suddenly stops sleeping at a semi-respectable time, it’s more than likely that separation anxiety is the culprit.

Frustratingly, your little one might fall asleep in your arms once lifted out of her cot because all she really wanted is you, her primary caregiver. Yay? There’s little you can do about this, but try to seek comfort in the fact that this won’t last forever and you will sleep again. You will!

3. Cries when you leave the room

Whether it’s daycare drop off, leaving her with an unfamiliar babysitter or even just an attempt to take a solo trip to the bathroom – a baby suffering from separation anxiety will bring down the house every time you leave the room because she’s not 100 percent sure you’re ever coming back.

Although sneaking off while her back is turned might seem like the kinder option, saying goodbye is very important. Help foster feelings of trust between you and your little one by developing a familiar farewell routine; this could be giving her a kiss and cuddle and telling her you’ll be back soon. She’ll pick up on your cues, so a prolonged, tearful goodbye with several return trips “just to make sure she’s OK” won’t do either of you any favours. 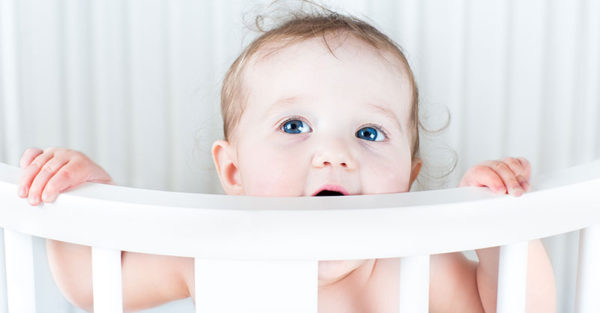 4. Gets upset when handed to someone else

Until now, your baby has been unable to decipher between different people. Instead, she’s been soothed by particular smells and sounds (most notably, your smell and sound). However, with the onset of separation anxiety – which usually begins when your baby is between six and 12 months old and can stick around until your baby is (brace yourself) two and a half – comes the recognition that you are an individual and an essential person in their life.

Once this realisation begins to dawn, it’s likely your baby won’t be happy about being handed to anyone else – even her dad – out of fear that you might leave her. This, on top of additional clinginess and a desire to be held most of the time, can feel hugely suffocating. Don’t let this deter you from ever leaving your baby – this stage is all about developing her independence and is an indication of the incredible bond the two of you have.

Your baby might have sat and played happily with her toys before, but now that she’s suffering from separation anxiety she seems incapable of occupying herself unless you’re playing alongside her too. Sit and play for a while but if you need to briefly leave the room (or even just a different area in the same room), tell her where you’re going and that you’ll be back in a minute. Every time you return, it strengthens the trust between you both that when you do inevitably have to leave, you will always come back.