Canadian born Kristen Adamson, struggled with fertility from the age of 19, when she was diagnosed with ovarian failure. Determined to have a baby, she embarked on a challenging journey towards motherhood, finally giving birth to twin boys, with the help of her sister’s eggs. And not only that, her experience has led to the creation of Pineapl, an exciting new app specifically designed to help others also going through infertility issues.

Kristen always saw herself as having babies one day, but as a teenager, she knew things were not right. “I always had strange issues in my menstrual cycle and it was probably around the age of 16 when I clocked that things weren’t working as I believed they should be,” she says.

Kristen went to the doctor who ran some tests and put her on the pill to try and kick her body into gear. This was only ever meant to be a temporary measure, so at 19, she stopped taking it, only to experience hot flushes. After doing her research, Kristen learnt of ovarian failure and felt she shared many of the symptoms. Her doctor thought it unlikely at her age but agreed to run the tests.

When the results came back, Kristen indeed had ovarian failure. “I knew the minute I got the call, it was going to be bad news,” she says. “The doctor herself was shocked, she’d never heard of somebody so young to be diagnosed with it at the time.”

Kristen’s first question to her doctor was, “Can I have kids?”. When her doctor said that she had a zero to five percent chance of conceiving naturally, it literally rocked her world. “The moment I stepped foot out of that doctor’s office, literally I collapsed, I just melted onto the floor and lost it,” says Kristen. “It was quite a devastating piece of news to receive. It’s devastating at any age, but at 19, I didn’t even know what to do with the information.”

It wasn’t until Kristen met her husband that it felt right. “I just knew that we were going to be going through this together,” she says.

Back when Kristen was diagnosed with ovarian failure, she stayed the night at her parent’s place, where her sister was living at the time. “My sister came into the room sat down next to me and said, ‘I don’t understand what you’re going through and I can only imagine how devastating this is, but I want you to know that if you ever want to use my eggs, they’re yours,’” says Kristen.

This offer still stood eleven years later when Kristen and her husband-to-be, now based in the UK, decided to try for a baby. Her sister was living in Canada, but they found a clinic in London, prepared to work with them. But the only option was for Kristen’s sister to travel to the UK for the transfer.

“We were getting married and she was coming over for that anyway,” says Kristen. “We worked quite briskly with the clinic to see if we could time a whole bunch of her pre-appointments with the wedding week.” Kristen then flew her sister back for the egg retrieval.”

Kristen became pregnant on the first go but sadly miscarried at nine weeks. “That was quite difficult considering everything we’ve been through,” she says. However, determined to try again, they transferred two more embryos as soon as they could. This time, both worked, and the couple became pregnant with twin boys.

While Kristen and her husband were thrilled to hear their news, the journey was far from over. “It was very exciting for about 24 hours and then it hit me that I could lose them,” she says. This made the pregnancy very difficult to the point where Kristen’s doctor told her she was suffering from pregnancy depression and she took six weeks off work. “I so desperately wanted to be excited but was just not letting myself be,” she says. “But those six weeks made a huge difference.” 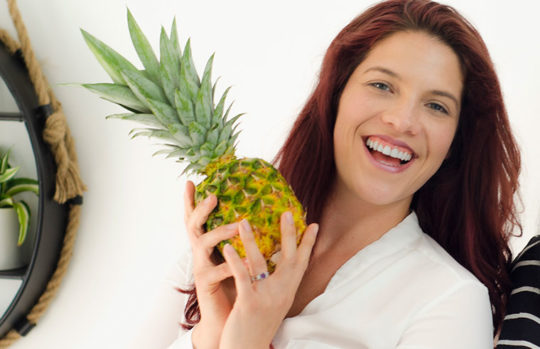 Luckily all went well. Kristen and her husband are proud parents of 16-month-old twin boys, and now her journey has taken her down another path. During her struggles, she tried to connect with groups online but found all the available platforms unsatisfactory with little privacy or control. As a result, Kristen and her friend Karla, now business partners, created an app called Pineapl. Aptly named after the fruit long associated with conception, the app offers those going through infertility an online platform specifically suited to their needs, with special features that allow users to custom build support networks and protect themselves against upsetting posts.

So, with a wonderful husband and two beautiful boys, Kristen’s story has a happy ending. And one that is now going to offer help to others. Kristen and Karla have recently launched their Kickstarter campaign, in order to raise the funding required to build this much-needed community for those struggling with infertility. After her own journey, Kristen knows better than anyone, just how much comfort and support this will provide.