Almost 22 months ago, I turned up at a hospital to be induced. I had no idea really what that would entail. I had been up to the hospital at least 20 times since the start of my pregnancy with reduced movement, bleeding, “you’ve got a fattie in there” measurement scans, consultant appointments …

Every single time I went, I was greeted by a warm, sympathetic and reassuring face. A face I (usually) hadn’t seen before. And some I had. A face that had no doubt worked a harrowing shift already, had a stressful week, and been spoken to like shite by a lot of birthing women who didn’t know what they were saying, and to who!

And the most amazing thing about that is, they were strangers to me. And the most soul-changing, painful, terrifying and beautiful moment of my life was going to be all over to them.

A team of women, and men, who suddenly became the most important people in my life, my other half’s life. And our baby’s life. We had four midwives in total in the delivery room with us – two seniors and two trainees. Changing shifts. The most important voice

Whilst I was pushing, and screaming that I couldn’t do it, their voice was the most important in the room. The words they were saying and how they were saying them were what kept my brain focused and aware of what was happening.

“You are going to have this baby soon.”

“Big push into your bum.”

“Don’t be scared, just go with your body.”

They made the decision to get a doctor when my baby was in fact, stuck. They kept us informed and aware the whole way through, even though I was high on gas and air. They made decisions that were in the best interest of me and my baby, and were basically trying to make sure we both survived.

I was surrounded by a team of highly trained people whose job and passion it was to put my baby in my arms. No matter what.

I had an assisted delivery, I had the room become busier with a doctor and others whilst they were all on hand to deliver my son. And they did.

“And then they were gone”

I was surrounded by a team of people who I’d never met before, who were just as determined to have my baby as I was. And I know nothing about them yet owe them everything.

The doctor was in the room for no more than 15 minutes. I don’t know who he was, but he gave me my child. He literally changed my life – and then left. I mean … that’s crazy.

The midwives were there to clean him up, give him some oxygen, weigh him, help Simon cut the cord, give him to us, log all of his stats, put his little hat on, check him over, help him latch on … And then they were gone.

Supporting and stepping away

They left us to bond as a new little family. And they went on their way to the next room to help somebody else.

The picture below was taken by Simon minutes after Barnaby was born, opening one eye up at me like…. “Hey. Trying to sleep here.”

But in the background, that arm you can see – I don’t know whose arm that is. A midwife. The midwife who gave him to me. They are the people who deserve so much more than an arm in a photo, but never get it. 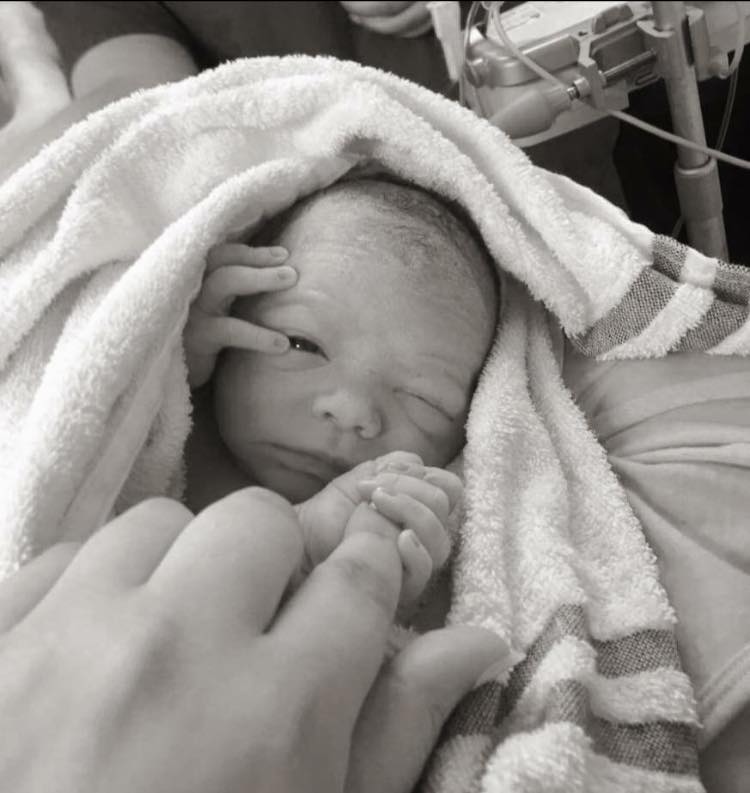 My first night, I was alone with my baby and he wouldn’t stop crying. A midwife came in and said she would take him into the office for a cuddle with them all, and give me a break so I could sleep. She took him, smiling and comforting him, and I cried myself to sleep feeling like a failure already.

But I did sleep. And they looked after my son. Passing him around, helping him when he coughed up a lot of mucus, singing to him, letting him sleep in their arms.

Hours old, and I felt I could trust them enough to look after the most precious thing in my life.

We went back to the hospital a few days later to get help with his feeding. I had a midwife, a lady I’d never met, squeezing my nipple to get some milk in to a syringe. Another was checking my stitches down below and commenting on the doctors handiwork!!

They meet you, and instantly have to form a bond with you that’s strong enough to make you feel comfortable with them checking out your sorest and most private parts within minutes. I mean, how many people can say they have that skill?

And the saddest part of all of this … I don’t actually know any of their names. I don’t think I even asked. But they were the angels that swept in and out of our lives, and brought us the most precious gift.

“The beautiful people that changed my life”

I took Barnaby into the ward weeks later to say thank you. I took a card. It’s still in there now. But it just said …

To all of the beautiful people that changed my life,

You, the first person to truly meet my son. You touched him, held him, smiled at him – before anyone else. You greeted him as he entered the world, and I couldn’t have asked for him to be welcomed by anybody other than you.

For you to be the first face he saw, skin he felt, voice he heard. You gave him his first look at what this world is like … and I am ever grateful.

With all the cruel and heartless people and things that happen on this Earth, it was your beaming face he was lucky enough to get to show him his first glimpse of life, light and love.

You are our super-heroes in blue!

You fly in and out of that room and, indeed, our lives. Another baby delivered. Another day done. But for us, you’re far more than that.

You may deliver hundreds of babies in your lifetime and not remember us – all in a days work- but we will always have a special place for you in our hearts.

When our babies come in to our lives, people always ask- who did you have in the room with you? I always say, Simon, my mum, and the midwives. Because you were there too.

We don’t forget you.

In the moment of “My god – we are parents. What now?!”, I don’t think many people will take the time to really thank you for what you do. But I would hate for you to feel invisible, unappreciated or “just part and parcel”.

We push hard and then we reach out, and it’s you that fills our empty hands with the best thing we will ever hold.

You are the one that guides our baby to us.

We don’t meet you very often in life, but when we do, we know we are all in safe hands. Your voice and words are our everything for those hours we are around you. And for those about to have a baby, there is no truer advice I can give other than ‘listen to your midwife’.

So please, on behalf of every mummy, daddy, and baby … thank you. Thank you for being you. For choosing to do the job you do. And for being our baby’s “first person”.