I’ve had three different births – emergency caesarean, VBAC (vaginal birth after caesarean) and elective c-section. According to some, only one of these births were ‘normal’ or ‘natural’, but they couldn’t be more wrong. There’s no such thing as a normal birth anymore, and the term natural is fast becoming a dodgy grey zone now too.

A lot of people still refer to the terms ‘normal’ or ‘natural’ birth but what do they actually mean? Traditionally they mean giving birth vaginally the way nature intended, with no pain relief or intervention whatsoever – including things like an episiotomy (the small surgical cut they sometimes make on your perineum to assist delivery and prevent mass tearing).

But now these words can have different meanings. More commonly, the term normal birth refers to any type of vaginal birth – regardless of whether there was an induction, pain relief or other assistance – as long as it wasn’t a caesarean; and a natural birth is a vaginal one that’s drug and assistance free. But there are SO many grey areas.

For example, if you pushed out your baby completely drug free but were induced to kick-start labour or had used IVF to conceive in the first place, is this still natural or normal? It depends on who you speak to.

The point is the words ‘normal’ and ‘natural’ can make a lot of women who end up having c-sections or other medical interventions, feel that they failed and that their birth didn’t really count as the real deal – even if it was really painful or traumatic. This can be so upsetting and potentially harmful for women, and creates a society where expecting mums may feel unnecessary pressure to have a ‘normal’ birth when medically the safest thing for them and their baby is to go a different route.

Not long ago the Australian Medical Association changed the way it promoted breastfeeding, in order to drop the guilt associated with feeding formula to babies, but nothing is being done yet about the birth situation. The reason for this is that organisations such as NSW Health are trying to reduce the amount of caesareans that take place in Australia – currently it’s 33 percent but the World Health Organisation recommends only 15 percent.

Interestingly only 6 percent of all c-sections are actually desired, which is a very important fact to keep in mind. I certainly had not wished or planned for my first caesarean, and wasn’t keen on the other one either – even though it ended up being elective due to health safety factors. 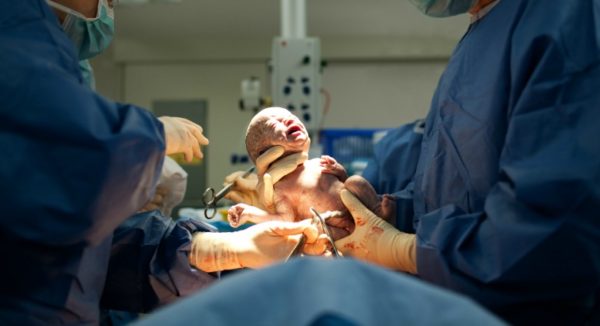 Babies are amazing, no matter how they came into the world, and that’s what I call normal

Normal not OK for the UK

Midwives in the UK fought for a decade to have the term normal birth banned to help women feel less like failures and emphasise that their birth is still significant no matter the delivery method or procedures used. They got their way a few years ago but only recently received a bit of press about it which has since sparked quite a big debate on the topic.

So why haven’t we done the same here in Australia? The reason is the opinions vary dramatically, which is quite ridiculous really when you consider that what some people think is normal (for anything, not just birth) others will interpret very differently. This is why we don’t talk about people being normal anymore, because just what is normal?

So, what births did I have?

When I talk about my different baby delivery methods I’m quite clear. I say I had two caesars (one of them emergency), and the other birth was vaginal, because that’s how my babies came out – two from my tummy and one down below. Although my VBAC felt very natural (my epidural was not effective AT ALL) there’s too much assumption with the word and I don’t want people misled into thinking I was lying at home on a pool bed of water lilies listening to Enya and refusing help (not that there’s anything wrong with that of course!).

And with regards to whether any of my births were normal, I would probably say they all were. Because these days c-sections are so common, whether they’re elective or emergency, so what really is the norm now? I believe the term ‘normal birth’ just doesn’t apply anymore and therefore should be dropped.

Your birth, your way

At any rate, how you feel and refer to your birth is your own decision and no one should make you feel bad about it either way. As long as your precious baby comes out safely, that’s all that really matters.

How do you feel about the terms normal and natural birth?