Scientists have released some really jaw-dropping 3D images of babies moving through the birth canal prior to delivery and they show just how much a baby’s skull and brain change shape as they enter the world.

The researchers used 3D Magnetic Resonance Imaging (MRI) scans to capture the images of the tiny shape-shifting noggins – and golly gee shift they did!

This bone-shuffling phenomenon is known as “foetal head molding” and it happens during the second stage of labour, when the baby has moved out of the uterus and is pushing through the birth canal.

There’s only been one other study that has captured visuals of this “foetal head molding” so these new images and accompanying research are being met with lots of interest.

Study lead Olivier Ami of France’s Auvergne University and his colleagues were able to capture “detailed images of seven infants’ skulls and brains before and during the second stage of labour,” Scimex reports.

“The analysis revealed fetal head molding during the second stage of labour in all seven infants, with different parts of the skull overlapping to varying degrees among the infants.” 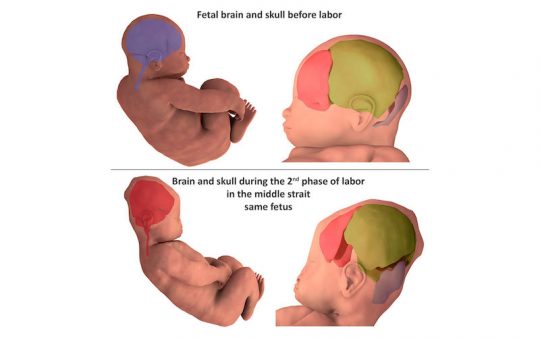 The research team found that following delivery “five of the newborns’ skull and brain shapes returned to their pre-birth state, but the changes persisted in two of the infants.” “During vaginal delivery,” study lead Olivier Ami explained, “the foetal brain shape undergoes deformation to varying degrees depending on the degree of overlap of the skull bones.”

“Some skulls accept the deformation (compliance) and allow an easy delivery, while others do not deform easily (non-compliance).”

The findings were just published in the journal PLOS One.