The more kids you have the more pro you get at this parenting gig right? Um, not always the case! I had a near meltdown last week because I couldn’t work out how to adjust the baby car seat straps and was stranded at daycare with three kids going bananas in the car. Oh the shame!

I used to think I was all over this parenting stuff – I have three kids, I’ve got the sleep routines down pat, can whip up a mean puree, diffuse tantrums, build forts, I’ve mastered the Baby Bjorn, can put a nappy on a wriggly escapee, play Uno with the older ones, sneak veggies into meals and more.

But there’s nothing like a stressful situation to knock you down a few pegs and make you realise that you are in fact not the experienced super mum you thought you were. Instead you’re just like all the other bewildered and struggling newbie parents out there.

Admittedly I have never had to install or adjust the car seats – it’s always been my husband’s job while I’ve taken the reins in other areas. So imagine my panic when I rock up to the daycare to get my youngest and realise that the car seat that we loaned to a friend hasn’t been put back in properly.

The first thing I did was hook the seat up to the anchor point and then secure the seat belt through the back. Voila! I am an amazing genius/mama bear looking after her tribe. But then I tried to strap my 18-month-old into the seat. Instant fail.

They were going bananas

The straps were way too tight. I tried re-positioning my bub and stretching those darn straps but it was not going to happen. So I was back to square one. I turned the seat every which way trying like a frantic crazy person to work out how to loosen the straps while all three kids were playing hop behind the steering wheel, honk the horn and flick all the buttons and windscreen wipers games.

At this point I was halfway in the car with my bum stuck in the air (knickers probably showing) while my wild cats screamed and howled with glee (I later found out that I also had a piece of paper stuck to my backside, nice). I saw other mums and dads calmly come and go with their children while I was bright red in the face, sweating hard and cursing under my breath. I felt so inadequate. How could I not work this out?! 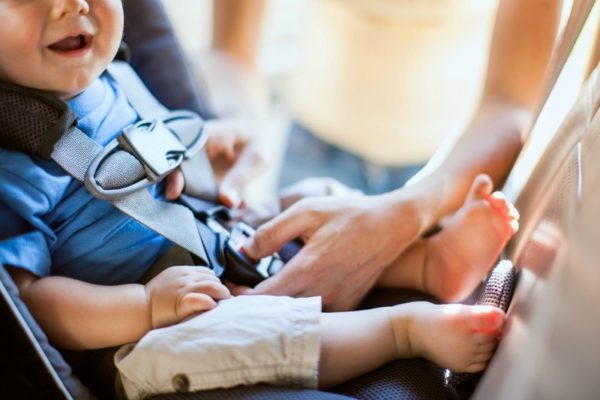 I tried ringing my husband who was on his way home from work, he would have to come and help me, but he wasn’t answering! I then also realised I was almost out of battery and my phone was about to die. I was going to be stranded at the daycare! With three tiny nut cases!

Then my panic really went into overdrive, I was way beyond frazzled and just kept pulling at the straps again like a mad person hoping for a miracle. Sure, I could have gone into the daycare and asked for help, but I was ashamed. I have three kids! I should know how to work the car seat!

Hubby finally calls me back (thinks there’s been an emergency given how many missed calls he had) and tries to talk me through it on the phone. “I still can’t do it,” I cry like the total rookie I clearly am. He says he’s on his way.

But I was not going to let this seat defeat me. I pulled everything out and started all over again. It worked! Miraculously I found the area where you can loosen the straps and got busy. Seconds later everyone was safely strapped in, my husband’s rescue mission was called off, and I was back in business. Yee-ha! Sure it had been a crazy stressful ride to get there, but I had done it.

The moral of this story is twofold – firstly don’t ever let someone else be in charge of the car seats, you need to learn how to do them too. Secondly – don’t EVER assume you’ve got a complete handle on this parenting gig, because you don’t. There’s always something that will knock that smug look off your face and make you feel like a brand new parent all over again – I know it did with me!