If you needed proof that the quest for “unique” children’s parties has gotten a little out of hand, then this unfortunate series of events will seal the deal.

Drawing on ponies is a new party thing

Painted pony parties are apparently a thing, and we can’t help but think that Instagram might be fuelling this unnecessary nonsense.

Lots of people are furious about this new party trend. A petition has been created online, in an effort to ban these painted pony (apparently UK) parties which involve small children scribbling and drawing on ponies with chalk.

“Animals do not want to be grabbed at, shrieked at or painted on for human’s enjoyment,” the petition states. “Take a stand today to get this unnecessary cruelty banned!”

Animals are not colouring books

Elisa Allen, UK Director of PETA (People for the Ethical Treatment of Animals) says painted pony parties are “wrong” and that animals are not colouring books.

‘The first lesson a child should be taught is the golden rule – to treat others as you would wish to be treated. So if children wouldn’t like to be forced to stand still while someone painted and drew all over their bodies, it’s wrong to subject ponies to the same treatment. Allowing kids to treat animals like colouring books is a lesson in insensitivity to which no thoughtful parents would expose their children.” 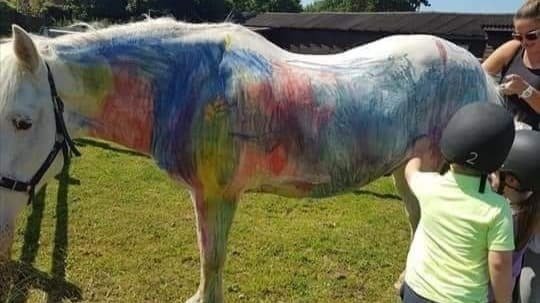 The petition, created by someone known as ‘concerned citizen’ urges people to track down businesses that are promoting and carrying out pony painting, and let them know it’s simply unacceptable.

“Research ‘Pony Painting Parties’ on Facebook and Google and politely urge any offending businesses to STOP. There are many other ways to maintain respectful boundaries at pony parties that do not involve painting the animals. Encourage them to be responsible party businesses.”

But not everybody thinks pony painting is “insensitive”. Some say that the ponies quite enjoy the attention.

“How many of you actually know enough about horse behaviour and welfare to claim this as abuse?” one Facebook user posted alongside a photo of a pony being drawn on. “This is an incredibly relaxed pony. They enjoy the gentle touching from the painting. It’s all non-toxic and safe for animals.”

“Pony is enjoying the attention, his head is low, eyes half closed and one back foot cocked up, totally relaxed, he doesn’t care and doesn’t know about exploitation or being objectified, he’s happy well fed and getting all the attention,” another wrote.

But a pony party critic points out that it’s not purely an issue of happiness, but rather of respect.

“It is morally wrong to exploit and objectify animals for our frivolous desires. Ponies are not chalkboards, just as much as elephants, dolphins, or monkeys. It is abusing power, It is shameful, disrespectful and unjust to use other animals like a chalkboard as a money-spinner, for therapy, education or any other reason when we have viable alternatives.” #Truth