First time flying with your toddler? You’ve probably convinced yourself that it won’t be that bad. They’ll probably sleep the whole way and for the moments they are awake, you’ll have the iPad ready to go. You might even get to watch a movie yourself. It’ll be fun. But you’ll soon discover that flying with a toddler should is none of those things. We think it’s best you find out sooner rather than later.

Here are the seven stages you need to prepare yourself for.

You arrive at the airport only to have to stand in a very long check-in queue. Your toddler is already painfully bored and keeps attempting to flee your side to climb on the luggage weight conveyor belt. By the time your bags are checked in you’ll have shoved so many snacks in their face you’re sure they won’t need to eat for a week — and you haven’t even made it through passport control or the X-ray machines yet. Oh, and once you make it through to your gate, you’ll have another long wait which will result in a trip to the shops and the purchasing of many lollies and toys to keep them occupied.

2. Toddlers will not be shackled

Finally you’re on the plane! But it’s at least another 30 minutes before you take off and your toddler is now jacked-up on sugar. Now begins the arduous task of attempting to strap them into their seat or your own lap (if you were crazy enough to fly with them before they turned two). Out comes the iPad, and more lollies.

By the time the plane’s about to take off they are screaming like a banshee, most likely farting in anger and demanding you let them go for a wee if they’re not still in nappies. Do you dare risk it? You smile weakly at the other passengers who are cursing themselves for being placed near you and shove some more chewy things in their mouth to help their ears. If the pilot doesn’t start the darn plane soon you’ll get up there and fly it yourself! 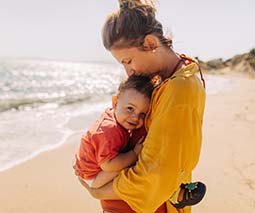 At last you’re up, up and away! Once you’ve gotten over the trauma of take-off – loud noises and ear pressure pain – and the seat belt sign is off, they are GONE. They will run around that plane like The Flash. Crashing into the air hostess and other passengers, climb on empty seats, escape behind the curtain into first class, and force you to queue for the toilet again because they need to “poo poo”. You will be up and down like a jack in the box.

4. You will be trapped and they will need to poo

Imagine this, you’re trapped in your seat at meal time. All the tray tables are down and filled with food and drinks. You’re nearly two-year-old is on your lap, throwing food everywhere and suddenly they do the biggest, smelliest poo imaginable in their nappy. The only way this could be any worse is if they were wearing undies. Even if they’re over the age of two and in their own seat, without fail it will be meal time when they suddenly need the toilet — urgently!

5. Nothing is good enough

The thrill of being on a plane has now worn off and your toddler is bored. Never mind the movies, TV shows and music at their fingertips, or the iPad, books, crayons and toys you packed, they are over all of it. You desperately tell them they might be able to meet the pilot but are shut down by the air hostess. Cue meltdown. At this point they’re on the loose again, pulling out life jackets and trying to open emergency door handles. You ask the flight attendant for a vodka. How cosy and sweet! Ask this mum again in 20 hours how she feels.

Your toddler is now way overdue for a sleep so you try to get them comfy, give them some milk, put on some lullabies or read a story. They are not having a bar of it. You try singing songs, getting more blankets and rocking them in your arms up and down the aisle. But they wriggle and resist until you put them down. Suddenly they’re kicking people’s chairs, throwing things around the cabin, pulling people’s hair and yelling like there’s no tomorrow. You try and plead with them, but as you stare into their crazed raccoon-like eyes you realise there is no hope. You’re just going to have to ride it out.

7. Get me outta here

Somehow your maniac toddler manages to collapse and fall asleep – but now the plane is making its decent. This means you have to carry a dead-weight toddler and all your carry-on claptrap off the plane. You get off and realise their favourite bunny is under the seat and have to return for it. Then your toddler wakes up just in time to queue again. Well at least you’ve made it, the nightmare is over. You may look 10 years older, but soon the holiday will begin. Then you hear a small and urgent voice, “I need to pee … NOW!”

Do you find flying with toddlers a nightmare?