When your child starts to ask questions about letters, all of a sudden, you realise how entirely confusing the whole concept can be for a preschooler. There are capitals and lowercase, different fonts and the names of the letters aren’t the same as the sounds they make.

With so many parents clueless in this area, we asked Barbara from Patchwork Cactus to share the simple Montessori-inspired trick she used to introduce the alphabet to her two children.

Before having children and beginning my career as a writer, I spent nine years working in Montessori education. If you don’t know much about it, you probably think it’s a hippy, cultish type of school. But it’s actually not like that at all. It’s simply a practical education style developed by an Italian doctor called Maria Montessori.

I am in awe of the education children get in these schools, but most Aussie kids don’t have access to them – my own included. This doesn’t mean they have to miss out on the ingenious ways Montessori classrooms teach children as young as three, to read, do simple maths and generally encourage an early curiosity and love of learning.

We all know that preschool-aged kids learn with their hands, they are sensory and really love to touch things to understand them. This is why they have to touch EVERYTHING. So keeping that in mind, this activity is a great first step in introducing letters to your kids. 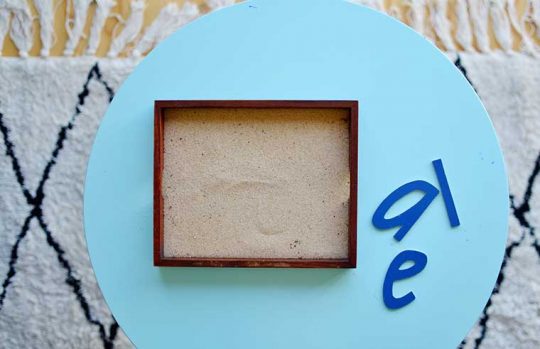 Now sit with your child and show them the letters, one at a time and encourage them first to trace the letter with their finger, and then draw it in the sand. 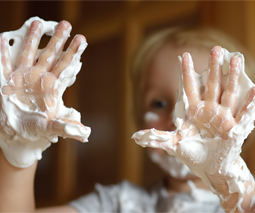 BUT, what you actually say when you’re doing this is where it gets a bit contentious.

In Montessori classrooms, the letters are introduced phonetically, rather than by their names. This means an ‘A’, is referred to as an ‘ah’. When kids start to learn to read and write, they need to know the sounds the letters make, rather than their names so they can sound things out.

Unfortunately, most kids’ TV shows and talking toys use the letter’s name, so the whole thing can be super confusing for children who are getting their information from a bunch of different places. 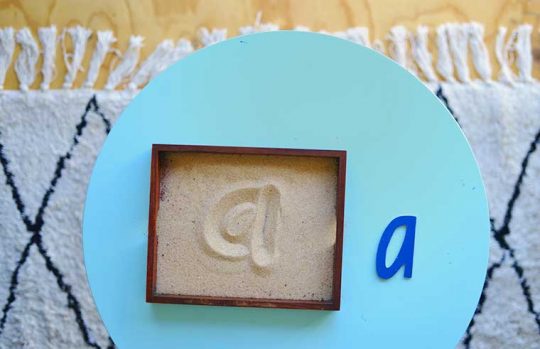 To get around this, as you are showing the child each letter, use its name, and the sound it makes.

Don’t start saying, “A is for apple,” or putting any more concepts on the table. Just introduce them to the letter and encourage them to draw it in the sand.

Depending on the age, they will probably only trace some sort of squiggly line and look proud. The chances of it actually looking like an ‘A’ are pretty low. But just smile and don’t correct them; it’s supposed to be fun.

Most kids will be good for about four letters the first time you do this exercise. The trick is to pack the activity away before they get bored. You don’t want it to be a chore. It’s always good to start with the letter their name begins with, a vowel and an ‘S’ (because ‘S’ is a fun one and it makes the same sound like a snake.)

Leave the tray somewhere they can see, and hopefully, they will ask to do it again; you can add more letters each time you do the activity.

Later, when it makes sense, you can start to say things like, “Apple starts with an ‘ah’. But remember, easy does it. Adults have a tendency to both over-explain concepts to kids, and try to progress them faster than they can handle. Just potter along and let them ask the questions.