When we told people we were doing major house renovations while still living there with our three little ones, the reactions were big. “Don’t do it!”, “Are you mad?”, “You CAN’T live there!”

But we couldn’t afford to rent nearby. We thought it would be fine. We were kidding ourselves.

So, to save other parents from the pitfalls we discovered, here’s how it went down for us.

Dust gets absolutely everywhere, even if you try and pack most stuff away or clean every day. It’s just hanging around in the air constantly, ready to land on beds, up noses and in your spaghetti bolognese. Closing doors and cupboards doesn’t work either, the building dust WILL find a way to infiltrate everything inside and outside the house.

Builders are noisy – standard. They’ve got to get a lot of hard yakka done after all. But did you know that builders also blare loud music, shout to each other, whistle and sing like nutters? Given they only work from around 7am to 4pm, it’s not too big a deal – unless of course, like me, you have a baby who still sleeps twice in the day! There’s a reason why builders wear hard hats and steel-capped shoes – construction sites are dangerous! So when you live in one with your curious little crazies, expect things to get hairy. For our three boys it’s been a dream come true (power tools, cement, and ramps!). For my husband and I, it’s been a heart attack-inducing daily nightmare. The baby has almost swallowed nails, dropped drills on his feet or fallen off ledges and is constantly crawling through muck and sharp stuff. The five and six-year-old should know better but simply can’t help themselves. They’ve climbed scaffolding, got on the roof, picked up tools to try and ‘help’ the builders, run barefoot on glass and screws and fallen in holes.

There are many different builders and tradies coming and going all the time, so you need to get yourself organised first thing if you don’t want a heap of dudes seeing you in your pyjamas or catching you sitting on the toilet. I swear, once the house is finished, my baby will be shocked when the rest of his male ‘extended family’ won’t be hanging around anymore. He’s become so used to seeing builders everywhere that when it’s back to just boring old us, he’ll be so confused.

You have to pack as much stuff away as possible during a build, but you’re living there too. You need your stuff! So every day you’re rifling through boxes trying to find stuff like a cup so you can have a tea, or a child’s school hat or the overdue electricity bill. You literally have NO IDEA where anything is so don’t be surprised if you find yourself wearing the same clothes for weeks on end – particularly if the washing machine has been disconnected. Don’t expect other mod cons to always be hooked up either; think dishwashers, ovens, lights, internet and phones. It’s camping inside, people!

There might be a time during your build when things are simply too crazy to stay there – which is what happened to us for a few weeks when they knocked a few walls down. Luckily we could crash at my Mum’s place, but she’s about a 45 minute drive away so the commute each day to and from school for the older two kids was a real pain. And again, we had no idea where any of our belongings were or whether the cat had run away back at home. 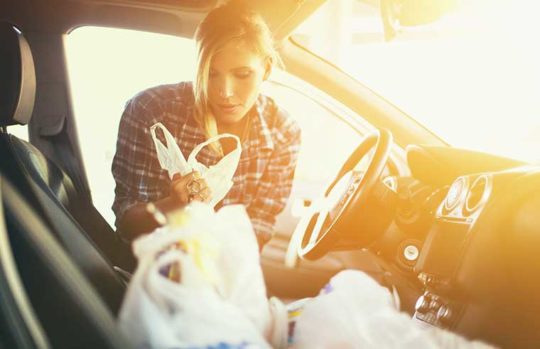 We haven’t had access to our back garden for the majority of our build which SUCKS when you have little kids. Talk about major cabin fever and grumpy moods as we’ve all gone slightly insane rattling around in our hazardous construction site of a home! Not to mention the garden has gone to the dogs and will need to be started all over again.

To say renovating with small kids has been challenging is a serious understatement, but I know our experience could have been a lot worse. So if you’re thinking of being crazy too and going for it like we did, here are my tips for making it a little bit smoother:

Our renos are thankfully almost done, but now I can already see the next challenge – making sure the kids don’t wreck the place before we’ve had a chance to live in it!