Remember the ’90s television show, Arthur? We do! Here’s two things we learnt about the classic kid’s program today: Mr Ratburn and the Special Someone

In all 22 seasons of the show’s existence, we had known Mr Ratburn was single, the sexual preference of the primary school educator had never been speculated on. That was until a new episode aired on 13 May, titled Mr Ratburn and the Special Someone – showing Mr Ratburn’s wedding.

The plot of the episode is about Arthur and his friends finding out that their teacher is engaged and, like all good children, they immediately set out to ruin things.

A new woman appears in the episode (voiced by Jane Lynch), and they all believe her to be Mr Ratburn’s fiancée. It’s not until they’re actually at the wedding that they realise this woman is his sister. Mr Ratburn is, in fact, marrying a nice young man. 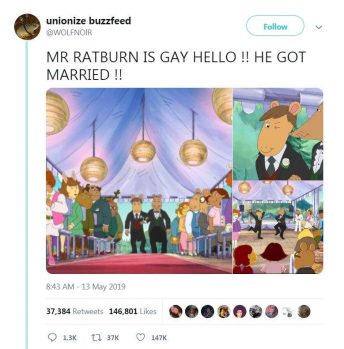 The most promising thing about the episode is the fact Mr Ratburn marrying someone of the same sex as him was not turned into a big deal. No mention was made of the event being ‘non-traditional’ – it’s simply depicted as a moment worth celebrating, like any other happy marriage.

While the show has been vilified by some (e.g. the Former Deputy Assistant for Donald Trump slammed it as part of a “war for our culture”), looking at Twitter it seems the episode has had a mostly positive response.

Some see it as a promising sign of how far our world has come:

remember when the arthur spinoff got in trouble bc lesbian moms showed up for like, one minute?

Others were more excited about being able to watch Arthur again, having assumed (like myself) that the show died with their ’90s Tamagotchi:

Seeing as this week is National Families Week, this revelation comes at a perfect time, as it’s a great reminder that families (and relationships) come in a variety of shapes and sizes. If more kids’ programs start to normalise these relationships, it will go a long way to promote open-mindedness and diversity.