It turns out the voice behind Bandit, the father of everyone’s favourite blue canine Bluey is none other than David McCormack who fronted Brisbane-based cult band Custard back in in the ’90s.

We realise we might be late to the party on this one, but it just clicked! 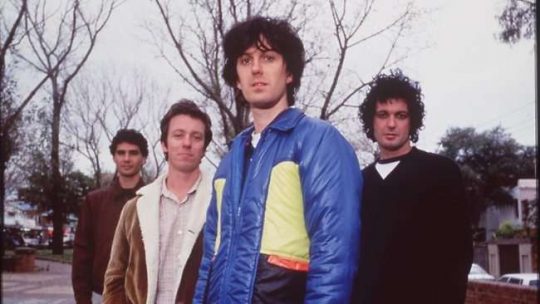 David McCormack (front) with his Custard bandmates back in the day.

An unforeseen turn of events

In a recent interview with The Guardian McCormack shared, “Who would have thought in 1992 that we’d be talking in 2019 about me being the voice of a parent dog?”

He assumed his legacy would always be for songs like ‘Apartment’ and ‘Girls Like That’ – but the success of Bluey and the attention it garnered turned out to be one of those moments where you realise that life rarely turns out how you envisage it.

Now 50 years old and a father of two kids (who are currently a similar age to Bluey), David says he’s become a lot more aware of how big children’s programming, music and books really are. Turns out it’s a much bigger market than his niche ’90s rock days!

“I’m yet to find out whether it’s the path to riches,” he told The Guardian. “But it is the path to being popular at school drop-off time. Lots of other parents are like, ‘Hey! Did I hear your voice on…’ It’s sort of like 1994 all over again, but in the primary-school world.”

We’re so happy to hear you love watching our new animated show, Bluey as much as we love creating it for you. Thank you for all the early follows! 💙 We’ll be making Instagram a place to celebrate the art and design of Bluey! ✏️ Including sharing the amazing work of all the artists who work tirelessly to bring Bluey to life! 💙🐶 #Bluey #Design #Art #AnimationStudio #Love #DogsofInstagram #Dogs #Family #Kids #Dads #TV #Australia #Brisbane #PreSchool #Learn

Most parents who watch Bluey with their children can’t help but love Bandit’s character – a father who is kind, available and playful in ways most of us strive for.

Lucky for McCormack, he sees a lot of himself in his character – which makes his job pretty easy.

Sounds like a pretty sweet (albeit unexpected) gig if you ask us!