If you thought Game of Thrones was all about power, ambition, dragons and nudity you would be wrong! It is really a show about parenting and family. Look a bit below the surface and you will find the whole premise of the show is basically just one big, messy family feud that explodes into the War Of The Five Kings.

Full of (mostly) awful parents and children behaving very badly, the fantasy show comes loaded with lessons about how (not) to raise kids.

Here’s 15 tongue-in-cheek tips so you don’t stumble into the same parenting pitfalls.

1. Don’t have kids with your sibling

No matter how hot they are. Not only does it cause genetic defects like Joffrey and make things really weird at family dinners, it can seriously complicate your claim to the throne. Plus all the secrecy and lying is SO stressful – who’s got time for that? Not to mention, trying to parent whilst pretending to be the ‘fun uncle’. No thanks! 3. Remember every parent has bad days

One day you’ll feel like a Queen ruling your domain. The next,  you’re being judged, shouted at and covered in crap. Every day is a battle – you win some, you lose some. Just take a deep breath and remember ‘it will pass’. 4. Never chain your kids up

… even if you’re the ‘Mother Of Dragons’ and your children are naughty, fire-breathing lizards. Locking your little ones in a dungeon just creates resentment and distrust and they’ll run away the first chance they get. 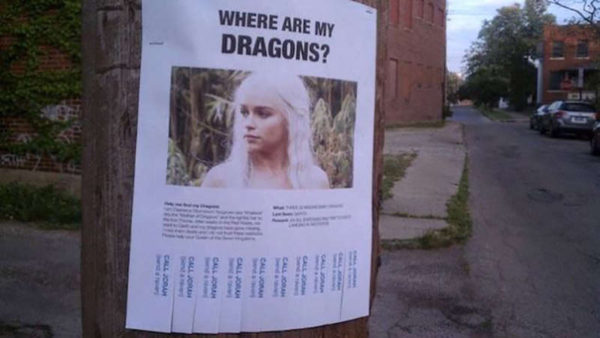 5. Don’t get caught in the act

If you’re planning ‘mummy and daddy’ time (or as Jaime and Cersei call it, ‘brother and sister time’), make sure you lock the door and shut the windows. After all, you don’t want a young boy having a sticky-beak when you’re busy.

If you do get busted, yes it’s gonna be awkward but DO NOT THROW HIM OUT THE WINDOW. That kind of reckless behaviour can really kill the mood … and start wars … and turn him psychic.

6. Be prepared to make sacrifices (just not literal ones) 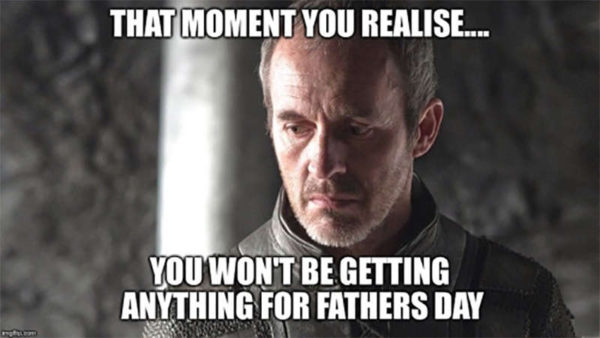 Not every girl wants to act like a lady or marry a lord. No, some like Arya, want to learn to fight and slay sworn enemies and become a blind, cockle-selling assassin. Sure, it’s not the usual career path dad would have picked, but at least she’s still alive.

There’s nothing more annoying than your kid busting in on you sitting on the other ‘throne’. Well, except maybe Tyrion throwing the mother of all tantrums and wielding a loaded crossbow. Always lock the door.

Out of sight, out of control, am I right?! Keep your eyes on your offspring or risk them getting away with murder, literally. Or taking castles that aren’t theirs, putting heads on spikes, joining the Night’s Watch, hunting ex-girlfriends, dying from poison etc. They’re going to get in so much trouble! (PS we don’t condone spanking, but boy, is this video fun!)

“Never forget what you are,” Tyrion tells Jon Snow in the first episode. “The rest of the world will not. Wear it like armour, and it can never be used to hurt you.”

It’s powerful advice, both for a bastard warrior and a toddler finding their feet in the world. Encourage them to love themselves and they’ll be able to conquer everything from kindergarten to an army of wildlings at The Wall.

“A very small man can cast a very large shadow,” Varys tells Tyrion in season two. It’s true for toddlers too. They might be short, but they sure are clever and unique little creatures. And just like Tyrion, they’re always asking for a drink.

12. Books are the best weapon a kid can wield

It’s not all swords and sorcery in Game Of Thrones. “Sleep is good and books are better,” Tyrion says in the novels. Tired parents may argue his priorities, but it’s an important message for young scribes. He also tells Jon Snow “a mind needs books as a sword needs a whetstone, if it is to keep its edge.” Read up, kids, and one day you might get to rule your own King’s Landing (or hopefully somewhere less deadly).

Tywin did, Catelyn did, Balon Greyjoy did … and look how their families turned out! Prioritising one kid over another pits them against you and each other, and sets you up for years of agro, anxiety and therapy. Play nice.

14. Ensure you hire the right help

They say it takes a village to raise a child and in Game Of Thrones, that’s literally true. When looking for a nanny, look for someone who’s protective and devoted. Like Hodor. Sob!

15. If your son’s old enough to rule, he can get his own milk

Sorry Robin Arryn, now you’re Lord Of The Eyrie, it’s probably time for mummy to shut the milk bar. If she did, she could have focused more time on sneaky plots and not getting thrown out Moon Doors.

This article is republished from Kinderling Kids Radio.