Call it a woman’s intuition. On a mine in rural Queensland, Kym Clark was in a meeting with her heavily pregnant manager and six men on-site. The men were all sitting comfortably in their high-visibility shirts, but the female manager had to wear hers open to accommodate her expanding baby bump. Kym had a brainwave.

The concept for She’s Empowered was born – a safety workwear collection for women which includes an industry first maternity Hi Vis shirt. “There was poor Steph, seven-and-a-half months pregnant wearing an open Hi Vis shirt with a singlet on underneath,” says Kym.

After identifying the lack of construction workwear options for women of all shapes and sizes as well as pregnant women, Kym created the collection to “bring awareness to equality at a social level”.

Women currently make up 16.1 percent in the mining sector and 11.4 per cent of the construction industry. Kym says the Baby Bump maternity shirt, available online, is the jewel in the collection.

“The shape allows you to grow with it, you can wear the same shirt from day one of your pregnancy, all the way to the end,” Kym says in an appearance on the Today show. Kym says men agree that women need their own style of workwear.

“They understand that when women are confident and that comes out into their workwear, they perform better,” she says.

The women’s range is made using stretch fabric, is more tailored in style and uses cut-to-fit technology in the pants, allowing the wearer to trim them off to length. 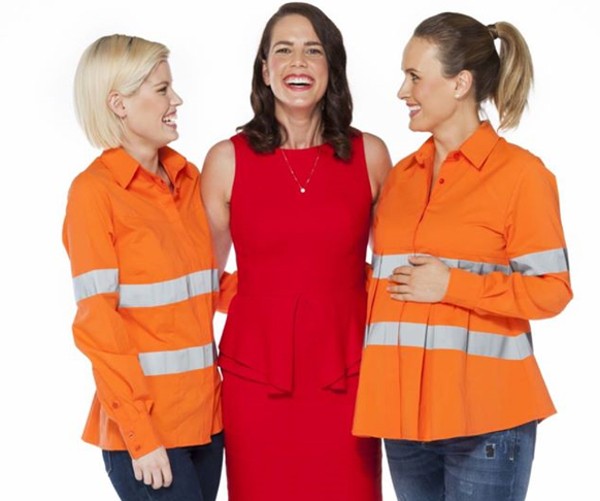 The She’s Empowered message is that “gender equality is achieved when people are able to access the same rewards, resources and opportunities regardless if they are a woman or a man”.

The world economic forum estimates it will take 80 years to achieve global gender parity in the workplace.

Kym is one of 20 female entrepreneurs inducted into the 2016 Hall of Fame for networking organisation HerBusiness.

Have a read of our recent posts that highlight the powerful video that shows the importance of banishing gender stereotypes or read Melinda Gates’ message that unpaid work is not just for mums.