An engineer has issued a renewed warning about the dangers of trampoline parks, telling parents that the multiple surfaces actually transfer energy between them making jumping a very unpredictable – and potentially bone-breaking – business.

The physics of jumping

Biomechanical engineer and university professor Pete Pidcoe told CBS News that his six years of trampoline park research has confirmed that an entire trampoline park can turn into one large, bouncing surface.

“We found there is energy transferred between trampoline beds. It’s really one big trampoline,” Pete said.

He notes that because the surface is so unpredictable, it’s easy to sustain injuries.

“The trampoline surface is changing height. Have you ever stepped for a step that isn’t there? Picture having that happen on a trampoline,” Pete told CBS News.

People – and children in particular – are sustaining broken necks, broken backs and broken limbs as the force from moving trampolines is transferred to their body.

The design of many trampoline parks is such that the energy from jumpers moves across all the bouncing surfaces. This can cause jumpers to double bounce or bounce out of control and collide with others. You can see the science of how that happens in the video below.

Pete also warns that when jumping together a parent can transfer a huge amount of force to a child.

In the video below you can see this in action as a dad jumps onto the trampoline his son is already standing on. The force of his jump is transferred from the trampoline to the child’s leg – and breaks his femur.

Part of Pete’s extensive research has in fact mimicked this scenario. He discovered that in cases like the one above, the dad would transfer double his weight in force.

“What we notice is the father transferring into the son 400 pounds of force,” he said. “It’s like getting hit with a hammer.” (That’s a whopping 180 kilograms, mums and dads.)

Pete wants everyone who uses trampoline parks to remember that “everybody in that system is influencing everybody else’s jump” and be super aware. (Or maybe give it a miss?!)

Wrapping our kids in cotton wool?

We’ve published warnings about trampolines here before and they’re often met with howls of protest, but the truth is trampolines are a real safety risk and trampoline parks especially so.

Last year Dr Lisa Sharwood told the ABC that kids were being left with permanent disabilities after jumping at trampoline parks.

“Some of these incidents have caused permanent and lifelong disability, resulting in legal action … but any changes we can make in the future will be too late for many children and teenagers whose lives will never be the same,” she said. 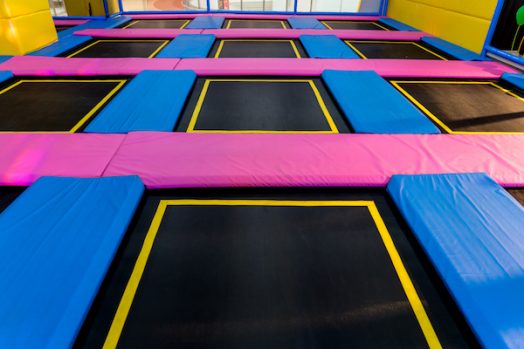 “Utah trauma surgeon Dr Craig Cook said he has treated about 100 patients with severe trampoline park injuries: broken legs, spinal fractures and head trauma,” CBS News reports. “These are the types of injuries that we’d see with high velocity type of trauma motor vehicle crash at 90 miles per hour that rolls or an accident where a patient a victim is thrown off their motorcycle and they fly 100 feet,” Cook said.

Experts also warn that kids under six should not jump on trampolines AT ALL, as their growing bones are particularly susceptible to fractures.

Kids are getting injured at these parks in ridiculous numbers. A Brisbane trampoline park former manager says the centre he worked at clocked up 1100 injuries in the space of a single year. So ponder that.

Worried child safety experts are pleading with the government to introduce mandatory safety standards for indoor trampoline centres. But at the moment the industry is self-regulated and this is simply not ensuring everyone is jumping safely.