When a mum shared an image of her toddler son in an ankle-to-waist cast after a trampoline accident, it prompted a rethink on the wisdom of allowing small children to play on trampolines. We also did a little digging and found out some frightening facts about young kids and trampolines.

Kait Ellen posted the update to Facebook, explaining that the whole family had been at an indoor trampolining facility – jumping alongside each other on separate trampolines – when 3-year-old Colton fell and was very badly injured.

“As hard as it is to relive the past 12 days, we feel compelled to make other parents aware of the danger associated with indoor trampoline parks. Colton fell and broke his femur, the strongest bone in his body, while innocently jumping alongside his dad and I.” The worried mum says her little boy’s injury has turned everyday life into a bit of a nightmare, truth be told. Colton’s cast needs to stay on for six weeks. That’s six weeks of immobility. Six weeks of tricky toileting. Six weeks of difficulty with all kinds of previously simple tasks.

“Our lives have been turned upside down since Colton’s accident and every day is a struggle for his sweet 3 year old self as he adjusts to life in a hip spica cast for the next 6 weeks,” Kait wrote in her update.

Kait says Colton’s injury has opened her eyes to the danger of trampolining for littlies – and some safety guidelines she’d been totally unaware of.

“According to the American Academy of Pediatrics and the America Academy of Orthopedic Surgeons ‘children under the age of 6 should never use a trampoline.’ This is due to the fact that their fragile bones are not meant to withstand the repetitive pressure from jumping. We had no idea and were shocked to find this out from our pediatric orthopedic surgeon during Colton’s hospital stay,” Kait explained.

She’s keen for other parents to be made aware of the risks of trampolines for kids under six, especially when trampoline centres often market sessions to younger children.

“These facilities are specifically advertising for Toddler Time, when in fact toddlers should be no where near trampolines. We hope by sharing his story it will prevent a child and their family from experiencing the trauma and heartbreak associated with trampoline injuries in young children,” Kait warned. A little bit of research shows Kate’s assertion that special sessions for littlies are actively promoted, despite the risk of injury is true, locally at least.

One Australian centre, Skyzone, are currently advertising a Little Leapers session for under 5s. Skyzone says on their website; “WARNING!!! Catastrophic injury, paralysis or even death may result from failing to follow the rules below and due to inherent risks, sometimes even if all rules are followed.”

Online local home trampoline retailer Trampoline Web and Warehouse responsibly points out that trampolining is not recommended for kids under six, but also note that it’s “a safer option than bouncing on the bed or sofa.”

That’s debatable as the experts tell us young bones and jumping are a tricky combination.

“Paediatric bone is different than adult bone,” US orthopedic surgeon Dr Randall Loder explained to US media outlet WTHR, noting that damage to kids’ growth plates can cause life-long problems.

A massive 3,000 trampoline-related injuries are reported in Australia each year – and an Australian Competition and Consumer Commission (ACCC) study of families using trampolines at home found that almost half the kids using this play equipment were under the age of 6.

“The safety guidelines also recommend that children under 6 years old do not use the trampoline, as at this age children are not developmentally ready for this type of activity,” the ACCC confirm. 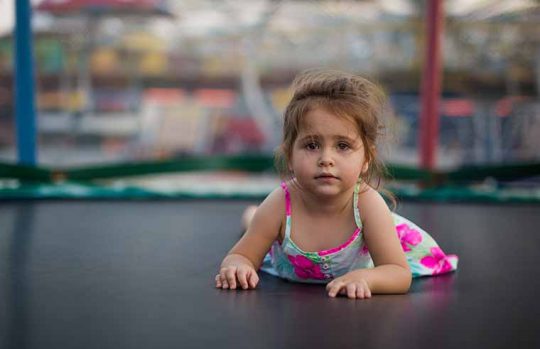 The Royal Children’s Hospital in Melbourne, who obviously treat many children with injuries sustained on this kind of play equipment categorically warn: “Trampolines are not suitable for children under 6 years of age.”

Yet the little jumpers jump on. A spokesman for the hospital said that serious injuries from trampolines across all kids’ age ranges are ever-increasing – and they’re more dire than you might think.

“We’re not talking about a fractured forearm. We’re talking about head injuries requiring emergency surgery to attend to a brain injury, spinal injury, significant organ damage. These are injuries no child should be subjected to,” Dr Warwick Teague said.

So what’s the takeaway from all this?

Children under the age of six should not be using trampolines – as trampoline manufacturers and health experts warn. Their fragile and developing bones are not built to withstand the rigours of repeated jumping – and their smaller frames mean they are more at risk of injury too.