It seems that every day there is a new warning to parents, informing them of the dangers of one thing or another. But this particular caution is a really good one to pay attention to.

A flat surface is safest

And let us just say that we totally understand the need for parents to have hands-free time when they have a small baby.

We’re all for it and have endured those very tricky hours when you’re trying to juggle dinner and doing something on your laptop and keeping a miserable baby from melting down.

That said, new advice warns against snaffling that hands-free time with the use of an infant incliner.

Loungers, rockers, swings and bouncers that incline at even the gentlest angle have now been found to potentially put babies at risk.

Researchers say that even a 20-degree incline (or tilt) is dangerous and a new report suggests incliners should be banned altogether.

That seems pretty radical doesn’t it, but there are excellent reasons – and hard science – behind this advice.

Setting them up to roll over

A new study led by Erin Mannen, Ph.D., a biomechanics researcher and assistant professor of orthopaedic surgery at the University of Arkansas for Medical Sciences found that the design of inclined sleepers allows babies to move very differently from when they are on a firm, flat surface.

“Babies were able to roll over more easily from their backs to their tummies in inclined sleep products,” Erin explained, ConsumerReports.org reports.

When small babies managed to use the tilt of these products to move onto their tummies, the results can be catastrophic.

Researchers found that they exerted nearly 250 percent more abdominal muscle activity and their oxygen levels dropped twice as much, compared with when they were on a flat surface.

It’s thought that when babies roll onto their stomachs in these products, they struggle to adjust their head and body position so they can breathe, but ultimately become exhausted and suffocate. Not hypothetically. This has actually happened to dozens of babies. Possibly more.

The Australian Competition and Consumer Commission (ACCC) confirms: “The United States Consumer Product Safety Commission has reported that at least 74 infant fatalities have occurred in the United States while using bouncers, rockers and recliners.”

It’s absolutely horrendous and tragic – and not something all parents would be aware of, especially when you can easily buy these products. They are widely recommended for little ones – especially babies who suffer from reflux. 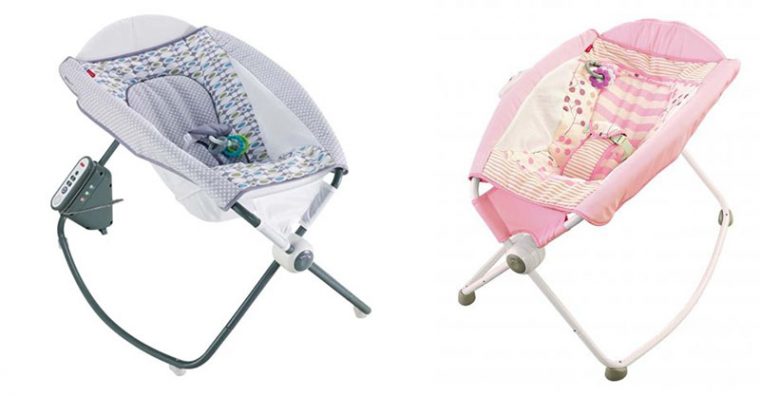 It’s important to note that this recommendation is not scaremongering, but rather that research is progressing and we know more about the products that pose a risk to babies.

Inclined sleepers or rockers do just that.

The Fisher-Price Rock ’n Play Sleeper was found to be responsible for dozens of infant deaths, with 4.7 MILLION of the product recalled.

“An independent study commissioned by the Consumer Product Safety Commission (CPSC) concluded that ‘none of the inclined sleep products that were tested and evaluated as part of this study are safe for infant sleep.'”

The CPSC has thus called for a ban on sleepers that incline more than 10 degrees.

Locally the ACCC is conducting a review into inclined baby products. For now, they recommend the following safety measures for parents who use them:

Or just don’t use them at all. That would be our recommendation.