“Spent the day in hospital”

Over the weekend the family had a nasty scare with Stormi hospitalised for the first time after what Kylie says was an allergy attack.

“Spent the day in the hospital with my baby,” Kylie captioned a photo of Stormi snuggled up on her chest.

“She had an allergic reaction but is 100 percent okay now and we are home.”

Kylie didn’t share details on exactly what caused the reaction but gave a shout-out to mums who were navigating their own babies’ ill health.

“Nothing else matters when these things happen. God bless all the moms with sick babies. I’m sending so much love and positive energy your way.”

It’s so often the case when you head to hospital with your child, that you are surrounded by families going through similar – or much worse – things. 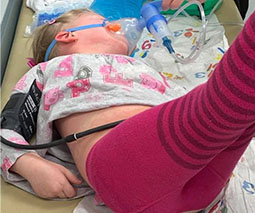 Many of us have been been where Kylie is, worried for her own child, but also acutely aware that some children are spending days or even weeks in hospital. It’s a huge perspective reset for most of us. “Screaming and freaking everyone out”

This is not the first Kardashian-Jenner brush with serious allergies. Several months ago Kim and Kanye’s son Saint suffered an allergic reaction during a trip to Kris Jenner’s holiday home in Palm Springs. Saint was rushed to the emergency room too, with the diagnosis a possible grass allergy. Kim said this scary experience traumatised her.

“Let me tell you when one of my kids gets injured or anything … I’m screaming and freaking everyone out. I did it this weekend when my Sainty had an allergic reaction,” she explained on Twitter.

“I jumped over the table like a hurdle lol. Screamed call 911 and Khloe had to calm me down! I’m either super-zen or so dramatic.”

“We ended up in the E.R., but all is well — we figured it out,” Kris confirmed during a recent appearance on Ellen DeGeneres’ show.

As we said, it’s unclear what sparked Stormi’s allergic response – perhaps something environmental or a particular food – but we do know that she’s a very adventurous eater.

Last week Kylie revealed her daughter’s favourite foods were Japanese-themed (although we’re not for a minute suggesting any of those prompted this trip to hospital.)

“Stormi loves rice,” Kylie said. “Stormi loves sushi [although] I don’t feed her anything raw She just loves edamame. They’ll bring the whole thing of edamame. She will not stop until they’re all gone. She’ll eat all the edamame … She’ll eat a whole bowl of soy sauce rice.”

We’re so glad young Stormi is on the mend and hope she’ll be returning to her favourite restaurant – the fashionable Nobu – very soon.