I don’t know about you, but one thing that really irks me is seeing mega quantities of wax sticking out of my children’s ears (like they’re hillbillies who haven’t washed for weeks). We all know you’re not supposed to stick a cotton bud in but then how do you get rid of it? Finally, I’ve got the answers.

Excessive or impacted earwax occurs in one in ten children (compared to one in twenty adults) – so it’s not just my kids! – and although it might look a bit unsightly, it can also result in a number of issues.

Smaller ear canals mean blockages and wax buildup can occur more easily in children. If not treated, this can impact on hearing and therefore development. Because young children are generally unable to express a symptom such as hearing loss, they often don’t get a proper evaluation or treatment.

Water can sometimes get trapped behind excessive wax build-up, leading to an infection of the outer ear which can be painful for little ones, so it’s essential to clean your child’s ears properly and get a handle on all that wax.

Years ago our parents probably just grabbed some cotton buds and got busy, but now we know better. It’s EXTREMELY important not to put anything into your child’s ear (or your own for that matter) as it could damage the eardrums or push the wax further in, causing other issues.

Luckily many parents are aware of this now, but some, like me, are clueless as to what to do instead. Enter Lisa Hellwege, Registered Nurse and Founder of Earworx (an earwax removal clinic), and her expert tips for helping parents FINALLY clean their children’s ears.

Coronavirus or just a cold? What to do if your child gets sick this winter

1. Use a soft washcloth

Ears are actually designed to be self-cleaning and don’t usually need to be ‘cleaned.’ Wax is produced in the outer third of the ear canal and is then carried out by a migrating skin layer which works like a conveyor belt. So when it emerges from the outer ear, you can gently wipe it away using a soft washcloth or tissue. Note-the cloth should only be used on the outside of the ear, and no fingers or cotton buds should be inserted into the ear. A soft washcloth is also a safe method if a child has any residue on the outer ear after an infection.

You can buy commercially prepared earwax softening drops from the chemist to soften and break down excessive earwax that might be causing a blockage, but olive oil works just as well. Lisa recommends using four to six drops of olive oil in each ear while the child lies on either side for five minutes, allowing the oil to penetrate the entire wax plug. This method will work best if done right before bed. Cotton WOOL (not a bud) can also be used in the outer ear afterwards to keep the drops inside the ear for longer. Never use a cotton bud to administer the olive oil or clean away the wax. 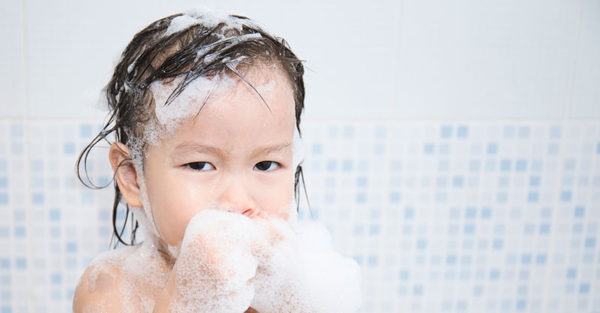 To prevent infections, blockages and keep the ears clean, parents should also help their child dry his ears after a bath, shower or swim. Have your little one tilt his ear to one side against a towel to allow the water to drip out on its own. A hairdryer on low heat can also be used for any trapped water within the canal. For any abnormal secretions from the ear though, always seek a doctor’s opinion.

If the wax buildup is excessive in a child and causing blockages in the ear, you can have it professionally removed in a clinic such as Earworx, which uses the same, effective micro-suction technology used by ENT (Ear, Nose and Throat) specialists. Earworx has a number of clinics in Sydney and Tasmania; however, children have to be aged four and over to have the procedure done. If your child is younger than this, they can provide you with ear health and care tips.

So there you go. Wax off people!