Khloé Kardashian has opened up about the circumstances surrounding the birth of her baby True, admitting it was a tense time and that this tension sabotaged her efforts to breastfeed.

“My milk was not coming in”

Chatting to fans on Twitter, Khloé revealed that despite best efforts, her milk supply never really got properly established after True’s April birth.

“I tried breastfeeding for weeks and weeks! For me it was so painful but I also was not producing a lot of milk. So I had to pump every time she was napping,” she wrote.

“I guess due to stress my milk was not coming in. I tried and I just couldn’t give her enough. So I had to go to formula.”

“I tried literally EVERYTHING!! ” she continued. “Doctors came to check, I met with the lactation specialist, I did power pumping, I drink the tea, ate the cookies, did special massages etc.”

“It just wasn’t working for me. Once True started losing weight because of it I had to give her formula.” I tried breast-feeding for weeks and weeks! For me it was so painful but I also was not producing a lot of milk. So I had to pump every time she was napping. I guess due to stress my milk was not coming in. I tried and I just couldn’t give her enough. So I had to go to formula. https://t.co/3ohDLsa1RU

I was definitely and completely in shock #KUWTK

It’s hardly surprising that learning her baby’s father was cheating on her with multiple women had both emotional and physical repercussions. It almost certainly sent Khloé into labour – contractions began the day after Tristan’s cheating was splashed across the internet. And now confirmation that she was “in shock” during her labour and that the extreme stress she was under also impacted her milk supply. 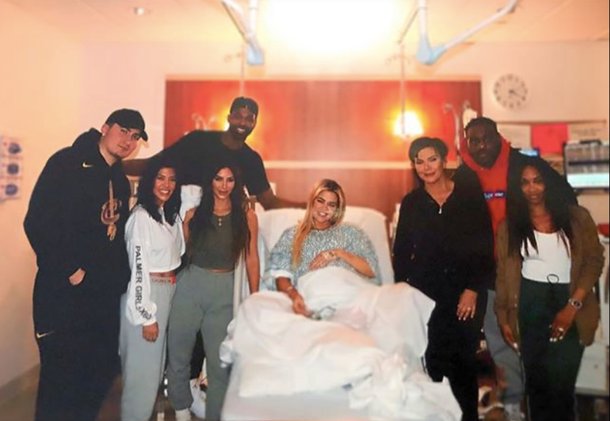 Sharing a photo from the delivery room ahead of the birth, Khloé said the situation was tense.

“One of the most awkward photos I have seen in a long time. You can feel the tension lol but it makes me laugh for some reason,” she wrote on her Instagram stories.

“I am definitely one of those people that when I am uncomfortable I nervously laugh. Welcome to my labour lol.”

As she chatted about tension and her breastfeeding struggles on Twitter, other mums chimed in to support Khloé – and share their own experiences.

“The same thing happened to me,” one posted. “It definitely was stress for me. As much as I tried to act like I was not stressed, the evidence was in the lack of me being able to produce milk.”

“You’re in a group of other outstanding mothers … it’s not a fail, it’s a try,” another declared.

“I had my baby on your bday. Imagine my surprise when the doctors told me she was born with Down Syndrome,” another parent explained sympathetically. “I had this goal about breastfeeding like a year. With all the stress and crying I could never produce what she needed. She’s 4 mth now. We LOVE her. Would not change a thing.”

Actual footage of @KrisJenner waiting for her granddaughter to arrive ?

Tune in to a new #KUWTK starting now! pic.twitter.com/nZTomWp3OU

We already knew that Khloé had switched to formula, but she hadn’t spoken openly about what led to her breastfeeding troubles.

Back in June Khloe revealed she was supplementing breast milk with formula:

“Technically, I don’t need something like this because I breastfeed, but because I don’t produce enough milk, I also have to give a bottle with every feeding. And, with the formula I use, I have to give True the bottle within 30 minutes of making it, so it’s amazing to have this machine make it for me. It’s super easy to use—and fast, so when I’m exhausted and can’t even keep my eyes open in the middle of the night, it’s a total lifesaver,” she told fans via her blog.

“I had to stop breastfeeding”

By July she had completely switched to formula after a long battle with the boob, telling fans that she had “fought and fought” to continue.

“I had to stop breastfeeding, it was really hard for me to stop (emotionally) but it wasn’t working for my body … I tried so very hard to continue,” Khloé posted. “I fought and fought … but then when I actually stopped, I didn’t realise what a relief it was for me to not stress and worry anymore. Any sec I had of downtime I was stressing to produce more for the next feeding.”

It’s clear that Khloé absolutely dotes on True and is a brilliant mum. And clearer still that she’s doing what works for her and her daughter. Ace job, Koko!

Watching @KrisJenner pass down her push present to @KhloeKardashian will make your week ❤️ #KUWTK pic.twitter.com/NlsZJtLXVs