When four-month-old Leilani Brown tucked into a bit of comfort feeding from her dad, the cute moment was caught on camera and shared on social media. What followed was … opinions! And lots of discussion about why babies feed, infant reflexes and male lactation.

Close to five million views later, and people are feeling a little challenged. Obviously, it’s usually women we see with babies snuggled up and attached to their nipple. A baby suckling on a man’s chest is a real ‘wait, what?’ moment.

“At first it was a joke, my daughter was asleep and I was on my phone about to record her sleeping and boom; she woke up and began nursing,” Chris told parenting site Motherly.

“It was the sweetest thing. I don’t want people to think I posted the video for any kind of clout, just sharing a bonding moment between my daughter and I.” 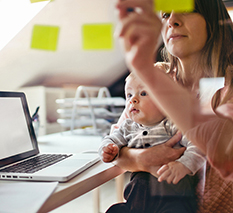 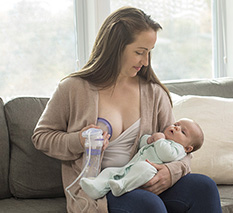 Lots of Chris’ followers loved the vision, and thought it made a lot of sense.

“Babies will latch on to bout anything on a person they find comfort in or their own fingers and toes. Had a cousin used to latch on to her sister’s bottom lip … You just never know. Depends on the baby.”

But others thought it was totally NOT okay and were very vocal in their disapproval.

“This is child-abuse to the extreme. This man is a jerk off. Not cool brother not cool.”

Others still thought that those who had an issue with the clip had serious issues of their own.

“People talking about how it’s ‘wrong’ and ‘disturbing’ are dumb as hell for being in they feels over an 8sec video with a confused but loving dad NOT overreacting to his baby comfort nursing.”

“It’s shocking how many people 1) know nothing about children and 2) sexualize normal infant behaviour.”

The topic of comfort feeding, in general, is a controversial one. Many parents think allowing a baby to suckle as a form of settling sets them up for months – even years – of pandering to a clingy baby.

Throw in some sexualising of babies’ behaviour and things get weird real quick.

The experts say that babies ‘comfort feeding’ from their dads is honestly … no big deal!

“I actually don’t think there’s anything about it that’s that different from a baby comfort nursing on mom,” paediatrician Edith Bracho-Sanchez told ABC News.

“Should dads go out of their way to start doing this? That’s up to every dad of course. Some dads are going to leave this up to mom and comfort with a pacifier or a bottle, and that’s OK.”

In some cultures, the strategy of other family members ‘comfort feeding’ babies is a given, a way of supporting mums and bonding with infants.

“The Aka, a tribe of nomadic hunter-gatherers living in the Central African Republic and the Republic of the Congo, share comfort-nursing duties … They are usually carried on the mother’s side, leaving the breast readily available for the infant to take when needed. If the mother is busy, the baby is typically passed to someone else, often the father or grandmother, who will offer up their own nipples to soothe the child,” The Atlantic reports.

Obviously, in western cultures, it’s a little hard to adopt this breast-ready approach, but whose to say that family nursing shouldn’t be an option for families who choose it.

At the very least it’s not “child abuse” as some commenters are asserting.