How can we raise our boys to be resilient men? Should young boys be treated differently from girls? Beloved author and parenting educator, Maggie Dent has raised four sons and says that little boys have very specific needs that all parents can meet to enable their boys to grow up to be healthy, well-adjusted men.

Maggie says this about how to raise resilient boys:

Maggie says that boys judge themselves harshly when they make mistakes and need us to do little things to show them that we care. “Boys often have this fragility around feeling loved when they’ve made mistakes.” She points out that for boys to feel secure, they need to feel that all the important people in their lives are holding them in our heart. “Whether it’s mums, dads, carers, aunts, uncles, grandparents,” Maggie stresses.

2. Allow space for them to come to you

Making allowances and giving boys space to regroup can go a long way. “When we want to interrogate them after school,” says Maggie, “this is the worst time of day to interrogate a boy. You know, he’s just come back from the war. He’s exhausted. And I think when we realise that we can be just more loving … just allow them to come when they’re ready, which is probably bath time.”

And you may not get the whole story then either. “Boys and men have a different code which we all get frustrated with at times,” says Maggie. “They are incredibly more forgetful than us girls.” Boys take longer than girls to develop their language skills, says Maggie, which can lead them to express their frustration as anger. “They often default to anger, and we get cross because they’re angry. And sometimes that frustration’s because they can’t communicate with us. So if we keep it in mind that there is actually significant research showing that boys are later to pick up language, and even by four [years old] … can be still struggling to put those full sentences together.”

Sitting with boys, using visual cues like hand gestures, says Maggie, can make all the difference. “Because they pick up visually, actually probably quicker than girls.” Boys will respond better, says Maggie, if we use less words and give more visual signals. “A lot less words and a lot more clarity of our intentions. And not call out to them in the other room, cause there’s no way they even know you’re talking to them,” says Maggie.

Boys are also very sensitive to facial expressions and Maggie cautions that they’re paying attention to your face even when they’re not responding to your words. “They pick up the rolled eye, they pick up the sigh of frustration. And there is a sensitivity around those things.”

Making space and time for physical play is very important for boys. Maggie says, “They’ve got a larger amygdala [the part of the brain that is involved with the experiencing of emotions] and they’ve also got more testosterone. So they’re actually wired to be more physically active.” Rather than dreading the hormone surges that happen for boys at three-and-a-half to four years, 10 years and 14 years, Maggie suggests treating boys the same – just provide extra structure and guidance for these surges of extra energy.

“I think I always saw it as that’s a time where I have to really be mindful of keeping them physically active in large areas,” she says of raising her four sons. “So I took them to the beach for hours after school, or … to parks, because I realised there was this incredible surging of energy … [if I could] get it invested into something that they love doing that wasn’t inside the house … I would have a much calmer boy when I came home later.”

While providing extra physical space can be tricky in inner city areas, Maggie says providing other activities, like big projects that boys can get engrossed in, can also be helpful. “Tasks that are so exciting … like: sitting for hours in your shed and putting balsa wood together with glue.” The more occupied boys are in activities that they find fun and engrossing, the easier the hormone surges will be for everyone.

Boys love rough-and-tumble play, but clear boundaries are needed to keep everyone safe. “Rough-and-tumble … is also a game,” says Maggie. “So every now and then it hurts, and they’re not really good at judging it because that takes reflection. So I always reckon a really good idea actually – with girls and boys – is to have three main rules in your family: one, try not to hurt yourself; two, try not to hurt others; and three, try not to damage things. You know, just keep it nice and simple. So that’s why we don’t throw toys, because we can damage things, or we could hurt people. So we keep it as simple as possible because they won’t remember any more than that.” 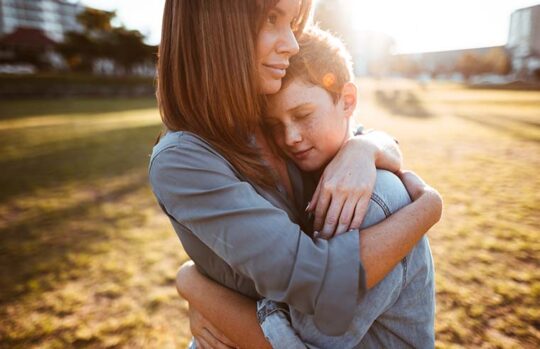 6. Speak gently and don’t shame boys for not being ‘tough’

“The bottom line is to keep the paradox in mind,” says Maggie, “that little girls are incredibly less strong physically, but much stronger psychologically. And that boys have the strong physical bodies and are more fragile. And if you keep that in mind, it kind of evens out that both of them have a slightly different tendency. Every single child just wants to be loved and accepted as they are, and when they make mistakes, which all children are biologically wired to make, that’s developmentally completely appropriate. We shouldn’t see it as bad or wrong, we should just see it as a poor choice and that’s the nature of childhood.”

We shouldn’t ask too much of our three, four, and five-year-old sons, says Maggie. She cautions against expecting boys to be tough, which can lead to them feeling shamed. “Because we tend to speak more toughly to boys. And so, when we tweak that a little bit, you tend to find there’s a lot less of the anger, which comes from feeling wrong and bad all the time.”