This year we had the most wonderful summer holiday. The kind that is filled with beautiful beaches, sunny skies, salty skin and ice creams. But life is not an Instagram feed. Our relaxing holiday was punctuated by teasing, fighting, shouting and tears.

I’ve tried getting down on their level and asking the questions (“How would you feel if your sister called you a ‘poo bum’?”, “Yes I know your brother breathing is annoying, but what is the alternative?”) and distract where possible (TV anyone?) there are times when I am completely lost for words and strategies.

Here are some tips, from experts and real-life actual parents, on how to deal with fighting children.

Wait, what? When my kids fight, I think they’re growing up to be emotionally distant sociopaths. Psychologist from Hey Sigmund! Karen Young says this isn’t necessarily so.

“As children grow into bigger humans, part of their developmental growth involves them establishing themselves as independent people. They need to feel part of a family, but they will increasingly need to feel their own edges, and experiment with how they are different from other people in the family. This is a really healthy part of growing up. As part of this experimentation, they will be looking to meet their own needs and assert their own minds, and these will sometimes conflict with others, especially siblings.”

2. Children are just like you, with slightly less-developed impulse control

We all have bad days. Things don’t go our way, lunches are missed, we don’t get enough sleep. Basically, our needs aren’t being met. Children have bad days too, but they lack the ability to recognise and manage these emotions. A hungry child can turn into a child that smacks their sibling.

Karen says, “Common needs for children might be a need to establish independence or equality, a need for attention, power, or influence. These are all healthy needs that we all have from time to time, but for children, it can be easier to stir trouble with a sibling than to, say, take themselves off for a sleep, negotiate, compromise, or ask for space or something to eat, or calmly voice their wish to ‘not share’ and to keep their special things for themselves.”

Alright already! I hear you, no more explanations, you want some strategies!

3. The gentle art of distraction

Don’t underestimate the power of distraction. It’s definitely an art form, given the tension, anger and frustration we all feel when kids fight.

Laughter is an incredible weapon. My son can go from tears to fits of giggles with a well-placed fart joke. Mum of two and step-mum to two, Katherine Cusack-Dunn says her methods are simple: “Connect and redirect”.

Sometimes distraction comes in the form of other children. During the holidays Kirsten Toovey says her kids get bored with each other, so she’ll organise other kids to come over to “dilute the energy so they don’t burn out.”

4. Make the consequences work for you

Rosemary Stachen is a genius. When her kids fight, she makes them do housework.

“I give them a verbal to back off each other, communicate and apologise. If that doesn’t work, I give them separate chores which happen immediately, and have to be done to my standards. I am consistent, so they know. Work is great because it gives them a positive way to transform and express their anger. Also, I love not doing all the chores. They start off feeling crap. They end up feeling better. They work out they have options, and that repercussions are real.”

While Rosemary admits it takes a lot of work and supervision, she says it’s worth the effort. 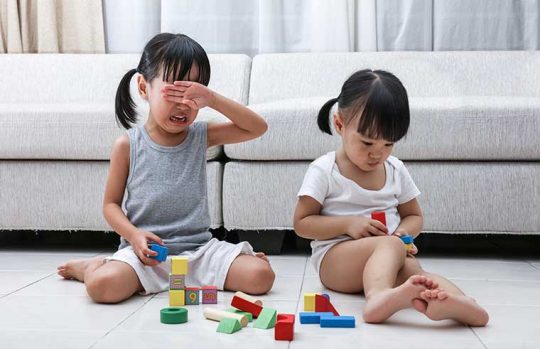 When Kerri Sackville’s kids fight, she turns the tables on them.

“My tried and tested formula is to absolutely forbid them to speak to each other or interact at all. Works every single time. They start talking and giggling together just to break the rules.”

When it comes to fighting, Karen says the best lessons are the ones your kids will learn on their own. If you step in and sort it out for them, they’ll never work out how to deal with conflict. The only exception is when one child is being intentionally and consistently unkind, or if it’s physical or cruel.

Karen says if it does go too far, try referring back to family values like courage, kindness and honesty.

“This can be a helpful baseline to bring everyone back to in the heat of battle. Are you being brave? Are you being kind? Are you being honest? This can help to give children the language they need to (eventually) guide themselves towards a healthy way of behaving.”

7. Think of yourself as a teacher, not a referee

When it comes to disagreements or altercations, Karen says the end goal is not to problem solve, it’s to teach emotional intelligence.

“Let them both know that it’s really brave to be able to say when you’ve done the wrong thing, and remind them that one of the important family values is honesty. When they acknowledge what they have done is wrong, let them know how brave they are – and – ask them how they are going to put it right.”

Ultimately with all things parenting, it’s about teaching and guiding our children, while keeping in mind that it’s all perfectly normal. In fact, it sounds like fighting can be good for kids, which is awesome, as my kids do it a lot!