A mum’s opened up a discussion on the parenting forum Mumsnet asking what bizarre kinds of things other forum users’ babies are scared of.

“I can’t stop worrying about the amount of things my 1 year old is afraid of!” she writes noting that her son is scared of ceiling lights, mysterious noises like the ice cream truck and Alexa’s voice.

“Please tell me this will pass,” this mum pleaded. “I can’t make light fittings go away, unfortunately!”

Mumsnet users came to the party with lots of pretty nuts baby fears, to make this mum feel less alone. They included …

“My mum had really long hair when I was a baby/toddler, and she said I went through a stage where I would cry my eyes out if she put her hair up in a pony tail!”

“My first was terrified of it. I think it was the noise when you rip a bit off.”

“A toddler I used to nanny was deathly afraid of fluff … like drier lint or the stuffing that comes out of stuffed toys. No rhyme or reason. He eventually grew out of it.”

“My youngest was scared of me singing The Dingle Dangle Scarecrow. Any other song was fine.”

“My daughter used to be afraid of rugs when she was a baby. If she was crawling she refused to crawl over the rug (even if it was on a carpet). If she couldn’t go round it she’d cry until someone picked her up and carried her to the other side.” 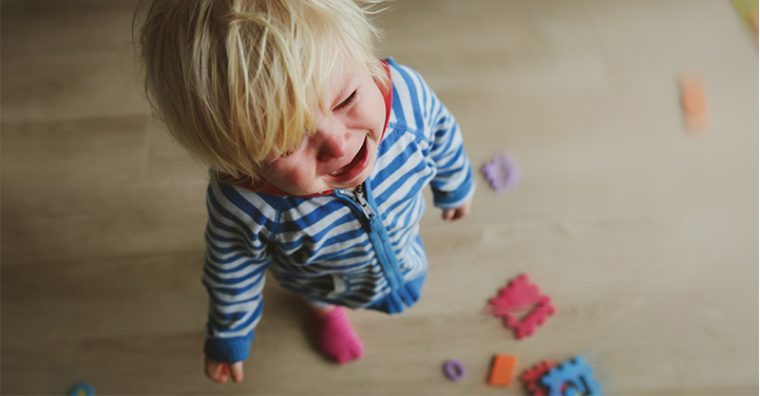 “My oldest was afraid of his own penis. That made nappy changes and swimming fun. He refused to just lie down and not look, he’d try and sit up to look at it, then scream his head off as soon as he caught sight of it. I have no idea what he found so terrifying, and the fear left as suddenly as it started.”

“Parrots. My daughter was terrified of them as a baby and toddler. No idea why. She had nightmares where ‘a parrot goes on my bed’ and at bedtime, we had to theatrically lock all the doors and windows ‘so parrots cannot come’ and recite who had house keys (‘mama, Daddy, Nana and Grandad, but not parrots!’). Sometimes she would announce that ‘I will be brave to the parrots’ but it was always false bravado.”

Snort. We will never look at a parrot quite the same again!