Most women are mindful of getting stretch marks when they’re pregnant but what about that other strange dark line that appears vertically down your tummy? It’s called the linea nigra and here’s everything you need to know. It’s a normal part of pregnancy

Don’t worry, you do not have a snail trail. Meaning ‘black line’ in Latin, the linea nigra is a brownish line that appears vertically on the centre of a woman’s abdomen in pregnancy. It’s completely normal and doesn’t affect you or your baby, being simply a darkening of the existing linea alba (white line) which is present (but rarely visible) on your tummy all the time. Some women even love it, seeing it as a special mark of what their body is going through. About a centimetre in width, when it first appears it is different from woman to woman (although the most common time is during the second trimester). The length varies too – for some it goes from the pubic bone to the belly button, and for others it continues up to their ribs or breasts. What causes it is the extra hormones being produced by the placenta – the same hormones which create melasma (skin discolouration and pigmentation issues) and darkened nipples.

Not all women get it

A linea nigra will only appear in about three quarters of all pregnancies, so if you don’t see one don’t stress because you may be in that 25 percent. In fact, those with particularly fair or pale skin are less likely to get one compared to women with darker skin who can be prone to a much more pronounced line. It’s just to do with your skin tone and how your body handles the different hormones, so rest assured there is nothing to worry about either way. 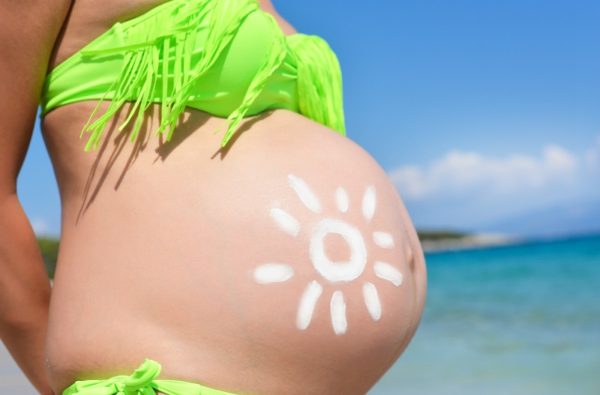 It will disappear after birth

Unfortunately there’s nothing you can do to prevent getting a linea nigra, however by keeping your belly out of the sun (or wearing good sunscreen), you’ll lessen the chances of it darkening or deepening further. The good news is, that like many other body changes and symptoms of pregnancy, in almost all cases this dark tummy line will fade after birth and eventually disappear. For some it can be gone a few months after delivery, whereas others might find it takes a little longer to fade completely.

There are a few old wives’ tales surrounding the linea nigra which some people swear by, but there is no actual proof for any of them. The main theory is that the length of your tummy line predicts what gender you’re having – one that stops at the belly button meaning a girl, and a line that extends up towards the ribs signalling a boy. Another tale is that only women expecting boys will get a tummy line, but if this was the case then there would be three times as many boys in the world – so this one doesn’t really add up either. The best thing to remember when it comes to gender is that there’s a 50/50 chance of which one you’re going to get, so best not get worked up about it and let your tummy line run its course.

Did you experience a linea nigra in pregnancy?