Did you know that one in ten of the 300,000 odd babies born in Australia last year were given one of the top ten baby names?

Number crunchers McCrindle have combed through the baby name statistics to come up with an up-to-date list of Australia’s most popular baby names.

McCrindle demographer Kimberley Linco spoke to Feed Play Love’s Shevonne Hunt about the local trends and what parents are thinking about when they settle on a name.

Kimberley noted that there are new considerations – such as a baby’s future digital footprint and potential personal branding – when it comes to choosing baby names.

She also explained that names with a link to the royal family were “the big influence” (hello William, Henry and Charlotte!) and that using what might have previously been considered masculine names for girls is a real trend (we’re looking at you Charlie!).

Kimberley also explained that unusual names were not so unusual anymore, and singled out weird name pioneer Gywneth Paltrow for helping the ‘anything goes’ naming philosophy gain momentum. 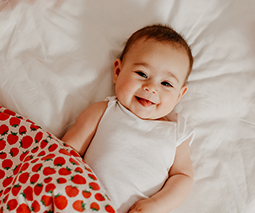 “Gwyneth called her child Apple,” Kimberley said. “I think she’s like 15 now … And that was just so bizarre to everyone. But now I think it’s like she paved the way for these unusual lists.”

Which names came out on top? Interestingly there was a real consensus for the most popular names across most states and territories.

“Oliver was the top boys’ name in all states and territories, except in the Northern Territory where Jack ranked number one,” McCrindle’s report tells us.

“Charlotte took out the top baby girl name in every state and territory except Western Australia, where Charlotte was ranked number three, beaten by Mia at number two and Isla at number one.”

“I think that’s something that celebrities have been doing. And it’s not to say that we love celebrity so much that we’re going to call our kids after them, but it’s just to say that you know for example Blake Lively she’s a woman but she has the name Blake,” Kimberley explained.

Botanical names are proving really popular with girls but not so much with boys, McCrindle’s report says, noting that Ivy, Lily, Willow, Violet, Poppy, Jasmine, Rose, Daisy and Olive are all in the top 100 for little girls.

There are a whole heap of three and four letter names in both top 100s, with parents perhaps trying to make things easy for their little ones by rejecting more complicated choices and choosing names that are easy to pronounce, spell and write.

And what are the up-and-comers when it comes to brilliant baby names?

Names influenced by celebrities and Australian places also got a hat-tip in terms of increasing in popularity.