I have a pretty bog standard name. Penelope. In fact, you wouldn’t think it would ever require any spelling out or repetitions when I first meet people. But for some reason, I have a lot of trouble getting my name across.

I don’t know if it’s because I mumble, or if it’s the ‘P’ at the front that makes it difficult to project, but about seven times out of ten when I first meet people they mis-hear my name as any of the following: Peggy, Pammy, Benny, Denny.

My point is, certain names can be a lifelong albatross. And while I don’t hate my name, I do wish my mother had gone for the more popular ‘Jenny’ way back in 1970.

Here are some other names that sound like a good idea at the time, but your kid may live to regret them.

I’m a repeat offender on this one. My kids’ names are Max, Henry and Alex.  The most troublesome of these is Alex. In his primary school class there were four other boys with his name. And in high school? I’ve simply lost count. I still love the name but wish it wasn’t quite so popular.

If you’re keen to avoid giving your kid a name that a squillion other kids in their school have, you might want to avoid the current top 10 names for 2021, as revealed by McCrindle: 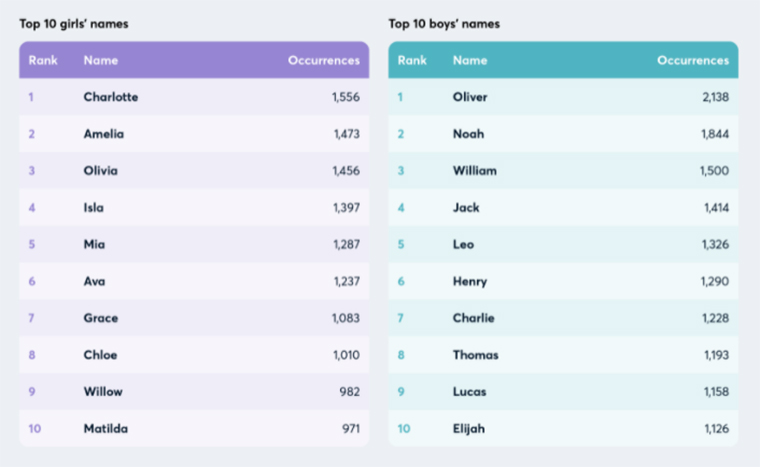 2. Names that name-check an inanimate object

We all want our kids to be unique, but naming your kid after an inanimate object, while cute for an innocent baby who no one will make fun of, will only come back to haunt them in primary school. So best then to stay away from:

3. Names that define a personality and are hard to live up to

Some names carry with them the weight of a certain personality expectation. Is it really fair to saddle your offspring with character definitions like:

4. Names that need to be explained every time

One of my friends called her first daughter Maia, and while I think it’s a gorgeous name, I have lost count of the number of times I have had to spell it out and pronounce it over and over for people in order to disavow them of the notion that her name is either ‘Mia’ or ‘Maya’. I’m fed up and it’s not even my name!

Here are some others that may confuse people ad infinitum for the term of your kid’s natural life:

*Full disclosure: I actually love a lot of the Irish names on this list but saddling your kid with one is not for the faint-hearted in a land of Aussie diphthongs. Suffice it to say, once your child hits the age of 14, what you think is cool, is the exact antithesis of what they think is cool. I’m talking about names like:

6. Traditional names with a mispronunciation twist

This goes under the heading of: cursing your child with the task of having to correct people for the rest of eternity. Top picks in this category are:

7. Names that are almost like traditional names but trick you at the last minute

Similar to the slight mispronunciation twist, ALMOST giving your kid a traditional name but then giving it an ‘original’ twist is sadistic cruelty.  Again, it’s a lifetime of correcting and confusing people with an almost-normal-but-not name.

8. Literary references that you thought no one else of your generation would think of

I know, right? I mean who knew every other Gen Xer would be calling their daughter Scout? But enough now with the To Kill A Mockingbird references! Rest assured the popular book or play that you loved in high school was beloved by a generation. While women with boys’ names (James, Alex, Maxwell, Drew) will end up being the winners when everyone in Sales assumes the memo is coming from a man, the men with names like Tracy, Gabby, Ashleigh, Aubrey and Shelley … will not.

This goes under the same heading as the rock star thing. What you think is cool and trendy, your kid … not so much.

11. Names that come with an inbuilt playground insult

Okay, so just about any name can be turned into an insult. When I was a kid, it was my surname that everyone picked on. And who knew that ‘Fireball Flanagan’ could be a pejorative? 20 years later a friend reclaimed the ‘Fireball’ portion of it as a positive reflection of (what he saw as) my sparkly personality.

Here are some names my ex-husband vetoed (due to the easy insults) when we were trying to name our first child:

The truth is, any name becomes embarrassing in the end. Case in point, my own very plain Anglo name that has caused me undue stress when booking tables or ordering takeaway in Asian restaurants in my neighbourhood. Does it ruin my life? Not really.

The one thing my mum did do right? She gave me a full name alternative.

Which is why, henceforth I should like to be known as, Penelope. (not pronounced ‘PennyLOPE’.)