In an adorable random act of kindness, a stranger has created a custom parking sign for a child’s bike, delighting the entire internet.

Writer  and mum Christie Dietz shared this cute story on Twitter recently, revealing a stranger’s kind act totally made her – and her son’s – day.

“My son has parked his bike by this lamppost just about every day for the last year. This morning, this sticker had appeared. Absolutely made our day. People can be so brilliant. Thank you, whoever did it,” Christie posted.

My son has parked his bike by this lamppost just about every day for the last year. This morning, this sticker had appeared. Absolutely made our day. People can be so brilliant. Thank you, whoever did it ? pic.twitter.com/rYC8jCTD5L

“People can be so brilliant”

Christie and her son were not the only ones delighted by this turn of events. People on the notorious nasty Twitter went nuts for this cute kindness.

“The fact the sticker is right at your sons height as well. Lovely. Little things like this give me hope for humanity,” one wrote.

“This is so precious I want to cry,” another said.

Christie said pretty much SAME-SAME for her with the teary thing and explained “I’m going to write a thank you note to stick on the lamp post later.”

“Such a good feel tweet … that picture is cheering a lot of people up … am sit here quietly watching the number of likes and retweets go up and up … it’s mesmerizing,” someone else gushed.

“Please let us know if you find out who did it! They must look out for him parking up his bike each day – his arrival and little routine must bring them happiness too,” another person wrote.

“Wanna steal this bike so bad tho!”

The update eventually caught the eye of The IT Crowd star, Chris O’Dowd. Chris is also a dad (of two little boys called Art and Valentine with wife Dawn O’Porter) but admitted it was the awesome RIDE that caught his eye, not the kind act.

“WANNA STEAL THIS BIKE SO BAD THO!!!!!” Chris shouted on Twitter, but people mostly ignored him. LOL.

On Twitter, user harryjohnston‏ staked a claim to the heart-warming act, claiming it was “the least I could do” after seeing the cheery little bike very day for six months.

“Thought I might have come across this on Twitter,” Harry posted. “I walked past it almost every days for 6 months and moved out of town for a little. I came back just 4 weeks ago and the little bike was still parked up there so your more than welcome for my thought. Hope it makes him happy.” 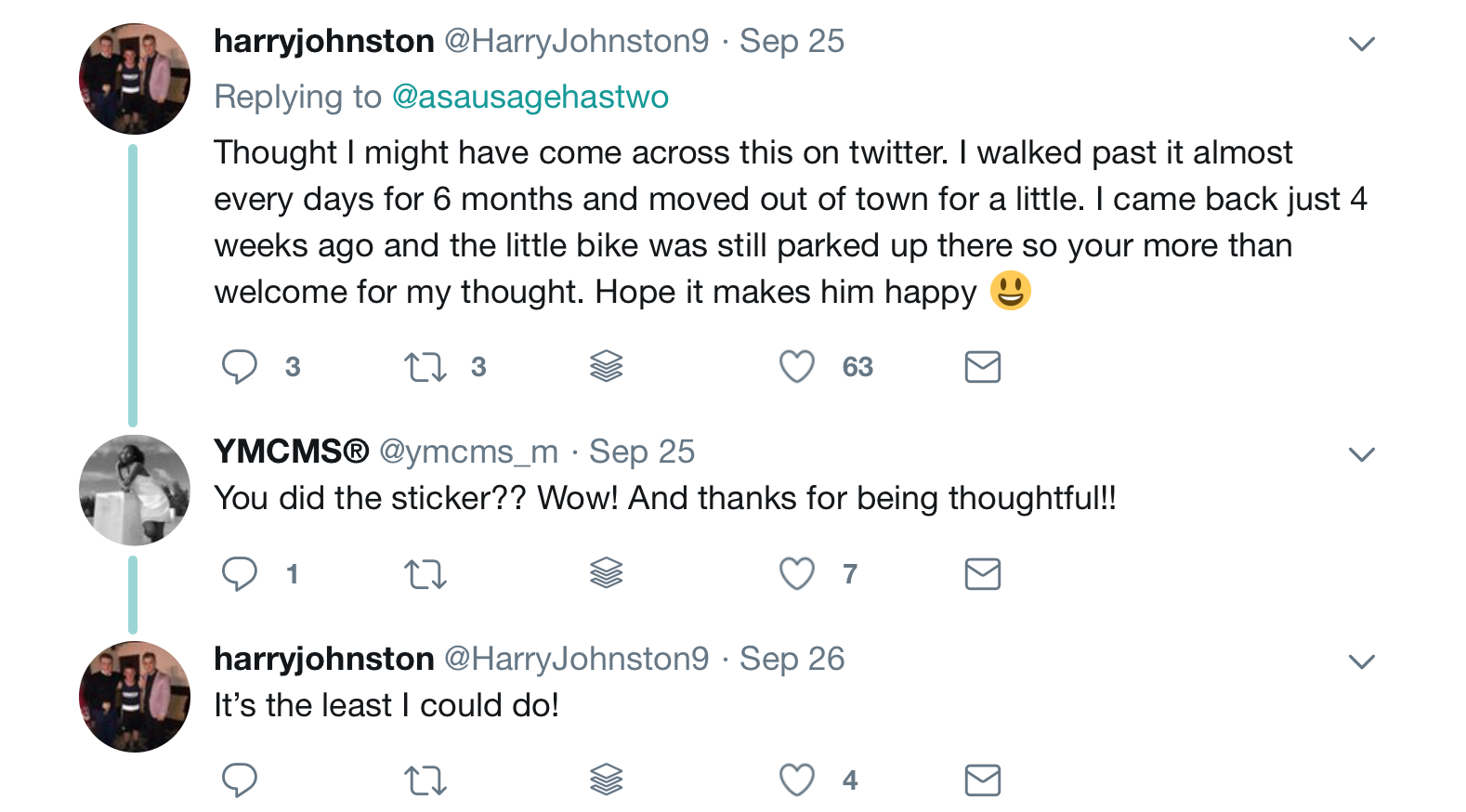 It made US happy. Good one Harry! (If indeed it WAS you that did this good thing.)