Years ago it was all about the ‘terrible twos’ but now it’s the dreaded ‘threenager‘ that’s got parents crying in the garden with a glass of wine. Why weren’t we warned?

It turns out this hellish phase didn’t exist until recently and guess what? We’re responsible. Yep that’s right, we created the ‘threenager‘ and here’s the proof.

Kids fifty years ago didn’t have dozens of outfits hanging in their closets. They only had one or two that were washed, repaired and re-worn over and over again. Therefore a zillion costume changes and tanties over clothes just didn’t happen.

The same applies to food. Parents didn’t have 10 different types of cereal in the pantry or multiple options for lunch – meals and snacks were simpler; what was in season, or basically whatever the parent decided was going to be given. From toothbrushes and toys to books and drinks, the modern three-year-old has too much choice. No wonder they can’t make up their minds.

Past generations of kids were not asked what they fancied doing or having. Mum and Dad made all the decisions, so why did we suddenly start asking our preschoolers what they want? They don’t know what day it is, let alone what they want. And even if they think they know, it’s usually not good for them (chocolate for dinner anyone?). Then we try we take away their choice after offering it which results in a meltdown. Now we’re the ones paying the price, because as soon as you give a three-year-old a taste of power, they’ll want to run the show every day, no matter what you say. 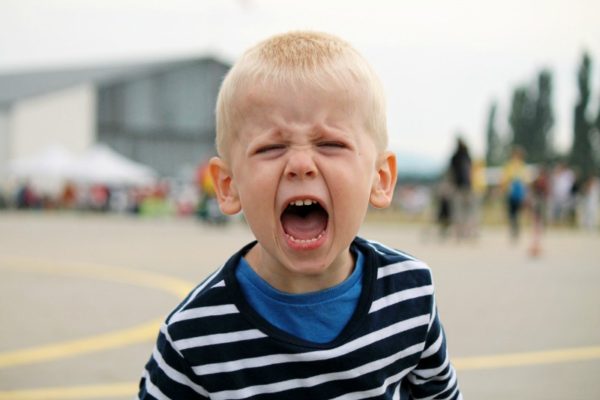 Little kids are entertained all. the. time. Televisions are bigger, toys have more lights, sounds and even move on their own. Screens and video games are never out of sight, parties are over the top, holidays are fancier, and playdates have shifted from quiet one-on-one time at home to noisy play centres. Add swimming lessons, dancing, soccer, occupational therapy and speech therapy and a three-year-old can crash with all that sensory overload and non-stop activity.

The term ‘threenager’ didn’t exist in the 70s and 80s, and guess what? Neither did the babyccino. Who thought it would be a great idea to start taking our little kids to cafes and give them pretend coffees? Even though they’re pretty much just froth, are we surprised that these same three-year-olds now turn around and give us sass? It’s the same thing with taking little girls to the nail salon. In their eyes we’ve treated them like equals so it’s only natural for them to completely wig out when we pull that illusion away from them.

There is a lot of unnecessary pressure on young kids these days when compared to several decades ago. Parents want the best for their kids and are urging them to learn to read and write faster, try new sports and other activities, and are quick to turn to therapy if they child appears to be lagging slightly behind in their learning and development. Whatever happened to just letting kids learn and develop in their own time, and not worrying about where every other child in mother’s group is at?

Grin and bare it

If you really think about it, a lot of nasty situations with ‘threenagers’ could be avoided if we lived a simpler, less modern life, and took a few parenting tips from the older generation. Next time you’re banging your head against the wall from the latest sass tantrum attack from Miss or Mister Three just remember – we created this monster and so now we’re just going to have to ride it out. Good luck!