Content note: This post discusses baby loss. Some images may distress some readers – For many, Mother’s Day is a happy day to celebrate their little ones and being a mum. But what about all those women whose babies miscarried, were stillborn or died shortly after birth?

International Bereaved Mother’s Day is this Sunday 6th May, and it gives mums who have experienced loss an important chance to grieve and honour their motherhood – and their “angel babies”.

An “angel baby” is a term given to a baby who died unexpectedly – either before or soon after entering the world – and many families live with the loss of a precious child like this.

According to Sands (the Australian miscarriage, stillbirth and newborn death support organisation), each year in Australia alone:

For the thousands of women who have lost babies this way, Mother’s Day can be an emotional reminder of this, and actually be quite isolating – even many years later.

“A bereaved mother’s experience of motherhood is inconceivably different to someone whose journey has taken the typical path,” says Sands CEO, Andre Carvalho.

“Alongside the death of her baby she also loses her identity as a mother. Because hers is largely an invisible loss, her motherhood is not always recognised or acknowledged.”

Heidi is mother to eight year-old Evie and a new baby girl. She’s also proud mum to another daughter, Ellie, who was stillborn in 2017. Tragically, Ellie died in utero at 38 weeks, just three days before a scheduled caesarean and right before Mother’s Day.

“After Ellie died I tried my hardest to approach the day in a celebratory way, by focusing on my daughter, but my heart just wasn’t in it. I felt numb and flat. I wasn’t really there – I was just going through the motions,” Heidi says. Heidi Welsh with husband Simon and daughters Evie and Ellie

For Heidi this Mother’s Day will not only be reminder of Ellie’s death, but also a celebration of her new baby and being a mum of three, with Ellie also remembered and acknowledged.

“The death of your baby is the worst thing you can go through – it’s so multilayered. We had a moment in time with Ellie and then we had to let her go, but she’ll always be my daughter and I’ll proudly remain her mother.” 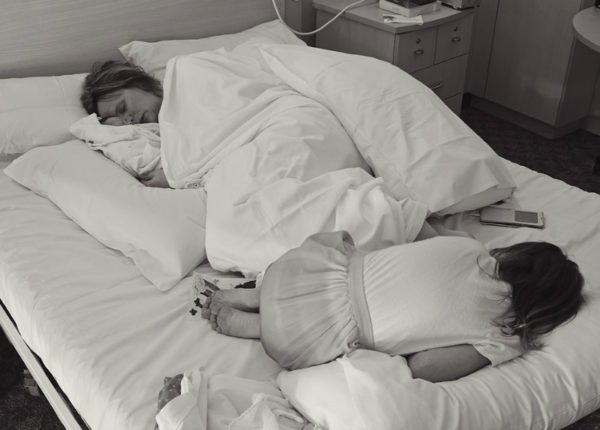 Heidi with daughters Evie and Ellie

A day for bereaved mums

For women like Heidi, this time of year can be terribly hard. International Bereaved Mother’s Day hopes to highlight their painful loss. Since 2010, this special day takes place one week before traditional Mother’s Day and is an opportunity for grieving mums to be recognised and honoured – even if they don’t have a baby in their arms.

It’s because of this day that women like Anne Altamore from Melbourne, Victoria, can finally identify themselves as a mother. Anne Altamore, who suffered a miscarriage and struggled to fall pregnant

In 1997 Anne became pregnant with twins conceived via IVF, however not long after she saw their little heartbeats, she suffered a miscarriage losing both babies.

After 12 gruelling years of IVF and another 17 unsuccessful embryo transfers, Anne never fell pregnant again. Her motherhood dreams were crushed, it wasn’t until many years later that her identity as a mother was actually recognised.

“In all the years since I lost the twins I never considered myself a mother. I felt that because it was an early miscarriage, I didn’t have the right to grieve,” says Anne. “But to me, as soon as I saw those heartbeats, they were very real babies. I had all the same hopes and dreams of a life ahead with them as any other pregnant woman.”

Through the Sands community and International Bereaved Mother’s Day, Anne says her babies have now been acknowledged as being as real as any other baby and “not the clump of cells that so many said they were.”

Adds Anne: “It’s one day of the year when I give myself permission to grieve, something any therapist will tell you is an important part of the healing and recovery process.”

Our hearts go out to all those mums who have lost babies. International Bereaved Mother’s Day takes place this Sunday 6 May and for those needing support after a miscarriage, stillbirth or newborn death, please visit sands.org.au.