When Lauren fell pregnant with her second son, she couldn’t wait for the two brothers to meet and become the very best of friends.

Things started well: “My older son, Max, cried when I had to take his brother, Ollie, back after their first cuddle,” Lauren said.

Unfortunately, things took a bit of a downhill turn after that.

Baby Ollie is now 18 months old, but the brotherly love Lauren dreamed of isn’t there.

She says she’s tried everything to help older son, who is three, connect with his little brother.

All that effort for so little joy

“Max now wants nothing to do with his brother. He will say things like: ‘Lets leave him here.’ Or, ‘Can he go to sleep now?'”

And in the rare moments where the two boys do ‘play’ together, Max is quick to stop what he is doing, take the toy off his little brother and say, “That’s mine!”

Lauren says three-year-old Max is usually a delightful little kid who is kind, social and goes to daycare happily.

So what’s going on?

According to mothercraft nurse Chris Minogue, this is all normal behaviour.

“You are doing everything right and have tried everything you possibly can try,” says Chris to Lauren.

“Accept the fact that friendships between siblings don’t form until much later on. Also, there is no ‘aha’ moment. It happens gradually.” 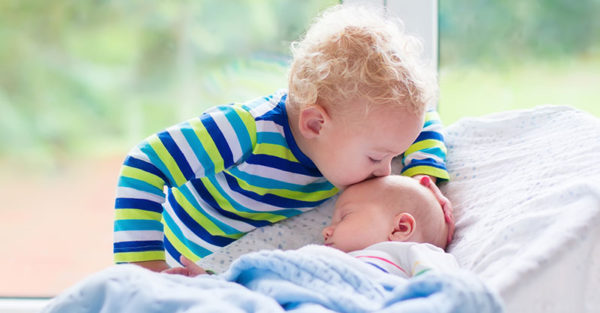 Establishing the foundations of friendship

Chris recommends focussing on developing strong boundaries as well as empathy and sympathy as they are the foundations of friendships that will happen later in life.

“It will all smooth itself over in time,” says Chris. “When the boys get to ages like three a half and five and a half, you’ll come into the room one day and they will be playing Lego happily together.”

The other important piece in this puzzle is making sure you parent each sibling mindfully. Make sure you spend individual time with both boys and discipline each child according to their age.

“Give them the basics, and they will work it out,” says Chris.

“But remember, you probably won’t see your hard work come together until they’re three and five.”