It’s a question that many parents ask each other: what number of children will make us the happiest? And the answer isn’t quite as straightforward as it may seem … unless you’re asking me of course – but I am totally biased.

I come from a family of just three members; it took my parents seven years to conceive me and when they finally did, via IVF, that was it – they decided no more children.

My childhood was spent in the company of a lot of adults, and I remember falling asleep on the couch many evenings during late-night dinner parties that ended way beyond my bedtime. When I was growing up, I would have told you that despite the pity-party most only children seem to get from outsiders, I was happy. I would have told you that I enjoyed being around adults and that I was glad that I learned how to feel comfortable in my own company from an early age. And whilst that is partly true, it doesn’t really cover the whole story.

Truthfully, I felt alone a lot. I felt like I missed out on a lot of the frantic, rowdy chaos that came from when big families were together. Those sort of families always seemed so much more in-tune with each other than mine did, and they all appeared to have so much more fun. I often felt like a lot of my parent’s focus was on me … which wasn’t always a good thing.

Having four children is definitely chaotic

At 32 years of age this year, my eldest daughter has recently turned 12 and my youngest daughter turned five last week. Between them, I also have two more daughters.

So parenting four children was quite the learning curve for me, after growing up with no siblings myself. It took quite a while for me to adjust to normal sibling dynamics, and my husband held my hand during a lot of it while I got my head around it all.

Having four children is definitely chaotic, and there’s no denying that it can get a little mental in our house from time to time. Okay, who am I kidding … every. single. day. But it’s not bad enough to make me wish that I hadn’t had so many children. On the contrary, I absolutely adore it. When my house isn’t full of children, the atmosphere is way too calm and quiet; it feels empty.

There seems to be this expectation that the more children you have, the more expensive everything costs and the greater the financial burden you’ll have. This is true, to an extent. Definitely, there are more single costs to account for but the way parents raise four children is often very different from the way an only child is brought up. Put simply, there is a sense of simplification with a larger family and a definite sense of reordered priorities. Not every single ‘want’ is met, and sometimes it does take more time for ‘needs’ to be met, too, but waiting isn’t always a bad thing and neither is ‘making do’.

Four is the magic number

In a study conducted by Dr Bronwyn Harman from the Edith Cowan University in Perth, it was found that parents with four or more children are the happiest parents.

She says that whilst parents of large families report stressors like chaos, noise and financial difficulties – this is outweighed by the joy the family brings to the household. The study reported a greater sense of life satisfaction for large families, too.

And I guess it is pretty satisfying when a parent of four children manages to get them out the door on time, adequately clothed; not to mention, that feeling when all four children are asleep at night … I don’t really think any kind of bliss compares, really. 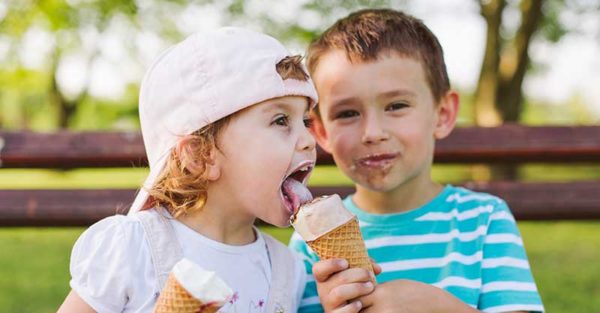 Other studies over the years found that having siblings improves the social skills of young children and their problem solving and negotiation skills, which is something I find completely unsurprising. I kind of wish I had a sibling growing up to help me navigate tricky social situations. It would have been nice to have some brothers or sisters to test social boundaries with.

Although there is always going to be financial benefits with a smaller family, and the ability to spend time with each child one-on-one in families of one to two children, I believe the case for larger families is strong.

There is something about the desire for a village and extended kin group, where labour and resources are pooled and shared amongst a larger group of people. Sorta like the making of my very own tribe.

But I guess at the end of the day, parents need to do what works best for them. There are obviously multiple contributing factors to consider, and each family can go on to make their own kind of happy, in their own way.