I thought I knew everything there was to know about boys – until I had three of my own!

I grew up in a house with two sisters, no brothers and I went to an all-girls school. All my knowledge of boys was gleaned from male mates during my high school years. Of course, I thought I still knew a fair bit about little boys – how mysterious could they really be? It wasn’t until I became a mum of three little boys all under the age of six that I realised how wrong I was. It turns out, there are some lessons you can only learn about boys in the parenting trenches.

Here’s what I have discovered thus far:

I always thought that having little girls would be such an emotional rollercoaster but it turns out that little boys actually aren’t any different in that regards. Tears flow thick and fast in our house, usually over hurt or anxious feelings rather than who punched who. I definitely don’t have a problem with their tears, it is just their way of expressing themselves after all, but I was certainly surprised by how sensitive they really can be. 2. Gross is an understatement

Confession time. I have a snot phobia. I freak out if it gets on me and when I see people picking their nose and eating it. Blergh! You can imagine that I am now in BIG trouble with three little boys under my roof. Granted, most kids love playing with their snot, it is like slime putty that’s always on hand. But girls usually grow out of this nasty habit around the age of four. Not boys though. Despite my efforts to get them to kick the habit, it seems this one is here to stay – for a while at least. Boys just seem to take it up a level on the gross stakes. It’s not just snot either! Our bathroom floor, walls, and toilet are constantly soaked in wee. I thought once toilet training was over it would be the end of wee puddles. It was not.

3. They couldn’t care less about how they look

Generally speaking, little girls love choosing their outfits and dressing up, which usually has the added bonus of encouraging them to take care of those sparkly threads. But not boys. If you can get clothes on them in the first place (lets face it, they much prefer nudity to clothes) they then have zero consideration for what state those clothes are in by the end of the day. I’ve lost count of of how many tops and pants have ended up in the bin thanks to stains, wear and tear – oh, and the self-styled scissor holes in their shorts. 4. The volume knob is always turned to max

Talk about noise! I always thought one pro of not having a girl would be I wouldn’t have to deal with those high-pitched shrieks and squeals excited little ladies like to make on occasion. Instead I’ve got non-stop shouting, screaming, yelling and singing. It never stops. Little boys always have their volume cranked to max even when they’re doing something quiet like playing with LEGO.

5. They’re constantly fascinated by their penis

Sure, we all know men love to play with their penis but it starts a whole lot younger than you’d imagine. The amount of genital touching that goes on is quite the eye-opener. To be fair, it is just hanging there, so it probably falls into the same camp as snot slime putty – it’s just always on hand. But they honestly never leave it alone! Especially when they’re deep in thought, it seems to aid the process in the same way fiddling with a pen or squeezing a stress ball can. Maybe their penis has the answer? Who am I to judge, after all.

6. Everything is a weapon

Sticks, broken plastic, LEGO, paper – you name it they will make a gun or another weapon out of anything they can get their hands on. It’s really quite resourceful actually. I used to be a bit worried about it, but now I think it’s hilarious. As long as they’re not aiming their “weapons” at friends or strangers in a mean way, or hurting anyone, then I don’t have a problem with it. 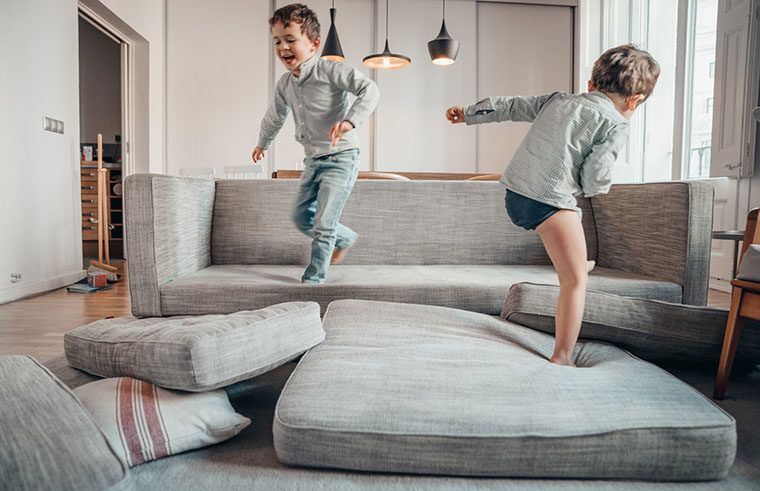 7. Their energy is limitless

They say little boys are like dogs – you have to run them daily. I still underestimated just how much energy they actually have in their tanks. Some days we do endless sports and physical games, and they’re STILL bouncing and jumping all around the house at 6pm. I don’t think they ever sit still. Ever. Sadly, their is no quiet hair braiding sessions in our house!

8. They’re in awe of their mum

Sure all little kids love their parents, but I’ve witnessed such a special love from my boys towards me that is different to how they love my husband. I think it’s because I’m the only girl in the house. They seem so fascinated about everything I wear or do, and want to treat me with special care and protection. I’m not sure how long it will last but right now it’s a really wonderful and unexpected joy and I’m cherishing it while I have it.

Being a mum to boys may not be anything like I expected but I wouldn’t change my messy, loud, sensitive and loving boys for the world – except maybe the snot. I really hate snot.