It’s easy to be an ‘expert’ on parenting when you’re not one. Before I became a mum I was convinced there were certain things I was NEVER going to do but… whoops! Fast forward to three boys later it’s a different story.

1. Babyccinos? What a waste of money

I used to think even the concept of this drink was pretentious and completely unnecessary, not to mention a complete rip off. A couple of bucks for a small cup of froth? No way. Not being a coffee drinker myself I didn’t have a strong desire to sit in a cafe with my mini-me while we both quietly sipped lattes. But then I gave it a whirl one day and that was it – they were INTO IT. And then it happened again. And again. And again. Advice? If you’re not keen on going down this bonkers babyccino path then don’t go near a cafe with your children – ever. 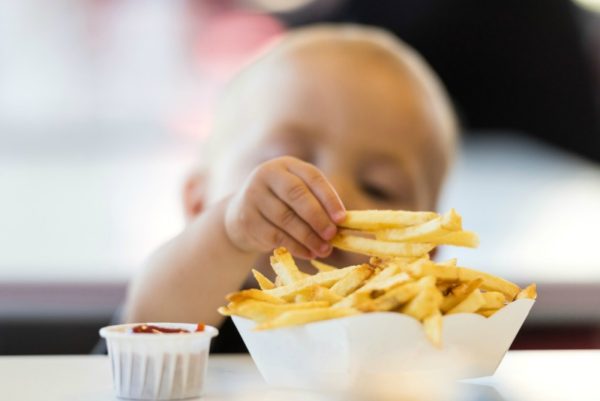 I was never under the illusion that my kids wouldn’t eat junk food, but I was definitely going to restrict it to special occasions only and make my own treats wherever possible. It started off well – my first son loved my homemade purees and a wide variety of fruit and vegetables. But after buying a chocolate custard squeezy pouch one day, it was all downhill from there. Suddenly I was picking up small fries from the Maccas drive-through on the way home because I’d left work late and it was almost dinner time. Keeping him entertained in a restaurant or at family functions was easier with his favourite treats, and chocolate bribes were needed for toilet training and avoiding toddler meltdowns in public.

Once you start it’s a slippery slope and even though all my boys do eat lots of healthy food, they unfortunately also have way too much junk. Because when life is busy it’s much easier to fling a packet of Tiny Teddies at a starving child than make chia and raw cacao protein balls in your non-existent spare time. Right?

3. Swearing will be banished from my vocabulary

I can swear like a trooper when I want to but when I first had kids I seriously curbed my potty mouth. Instead of letting rip when I hit my elbow or something bad happened, I was suddenly saying things like ‘ouchy’ or ‘eff.’ That was… until the kids got bigger and crazier and there were more of them. I don’t swear directly at them of course, but I know I’m definitely within earshot when I go to swear town by myself or to my husband in exasperation. I’m working on it, but am not going to be surprised in the slightest if I start hearing the same words fall out of a few tiny mouths. I was going to be the best mum ever. I was going to make freshly baked biscuits every day, be the master of imaginative games, teach my kids to read super early with flashcards and have them sleeping through the night from four weeks – all while maintaining a career, keeping an immaculate home and looking fabulous. I was never going to ignore my kids and give them my undivided attention always. BAAAHHAAAAHA! Okay, so I am a pretty good mum, but thanks to things like the mobile phone there have been plenty of moments where I’ve been distracted or ignoring my children when I shouldn’t be and I’m not proud of it. You’d be hard pressed to find a parent who doesn’t fall foul to this almost daily – even if it’s only for a few minutes each time.

5. No yelling allowed – I’ll be zen at all times

I was going to raise my children to be happy little angels who never screamed or were naughty or difficult. I was going to do this in a calm way, without raising my voice or losing my temper. I was KIDDING MYSELF. This is another one I’m not proud of, but sometimes when you’re at the end of your tether and being kicked and yelled at by a banshee toddler having a raging tantrum you just can’t help yourself. And even when they get a bit older, you’re still forced to yell to be heard over their insanely loud voices and annoying games, or to get their attention when they’re distracted, in dreamland or flat out ignoring you (it’s probably payback from your mobile phone obsession).

You don’t know ’til you’re there

Just because you think you might not do something as a parent, it doesn’t necessarily mean it’s going to turn out that way. When it comes to children NOTHING goes to plan, even if you really want it to. So if you find yourself caving like me, try not to stress too much but do be prepared for some of your actions to come back and bite you on the bum.

What things did you say you weren’t going to do as a parent?