As a mum of one, I thought I had it all figured out.

I breastfed exclusively, responded immediately to my child’s cries and attachment-parented my way straight to Exhaustion Town. I admit to having been a *teensy* bit judgey of mums who laughed about feeding their kids Cheezels for dinner or sipping wine in the pantry while their little ones watched Peppa Pig marathons.

Oh, how little I understood then. Now that I have a five-year-old and twins, who are nearly three years old, my outlook has changed dramatically. My kids are still my number-one priority, but sometimes mama needs a darn break. Or for everyone to cooperate without whingeing just this once. So, I devised these weird life hacks out of desperation. Don’t judge me – just try them and thank me later.

Kids driving you cray? Open the bottoms of old cardboard boxes and place them over your children (with their heads sticking out the top, of course!). Hand them some texters and let them create masterpieces on the insides of the boxes. My kids absolutely love it and I get at least 11 minutes of peace.

Bonus tip: Give them permanent markers and tell them it’s a special treat because they’re “adult texters” and they have to be “really careful”. You’ll get at least 16 minutes of serenity – totally worth the semi-permanent tattoos they’ll be covered in when they emerge from their boxes.

Harness the power of your children’s competitive spirits to get them to eat their veggies. My kids will munch away on ANY vegetable if I challenge them to a “Crunching Contest” to see who’s the loudest cruncher.

I simply have to say, “OK, who has a carrot? Find a carrot in your bowl! 1-2-3… CRUNCH! Arabella wins! That crunch was so loud.” They’ll even do it with non-crunchy veggies like mushrooms because they’re so desperate to beat their sisters.

Put your team of terrors to work cleaning the windows with microfibre cloths and spray bottles filled with water. It’s not child labour if they like it! Your windows are very unlikely to be clean by the end of it, but you’ll enjoy a brief moment of silence.

4. Swimming in the bath

Kids driving you cray 2.0? Tell them it’s “Bath Swim Time” (you don’t even need a catchy title) and let them play in the bathtub in their swimmers. You’ll have to supervise, but at least they’ll forget about trying to poke each other’s eyes out for a few minutes.

“Dip Dinner” is another great way to ensure your kids get their vitamins. Cut up a bunch of different veggies (some raw and some cooked) as well as some strips of grilled chicken. Put a huge dollop of hummus in the middle of their plates and announce that it’s “Dip Dinner” – everything on their plates can be smothered in the tasty dip!

We introduced it for the first time while we were away on a family trip, so now it reminds our kids of holidays and they think it’s a treat. Who are we to correct them?

Our twins were both waking several times a night until recently, so I drew up some reward charts and promised them a sticker for each night they stayed in their beds without calling out to us. When they accumulate 10 stickers, they’re allowed to choose a small toy at the shops.

It really works – they stay in their beds when we’re doing the charts, but they start waking again as soon as we stop. Bribery is a powerful tool! 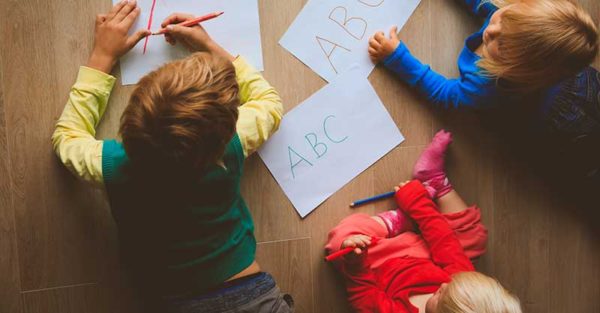 How do you get three children who wake before the crack of dawn to stay away from your bedroom for at least half an hour? Leave out different toys or activities in the living room for them to discover in the morning.

Sometimes we print out colouring-in pages from websites such as SuperColoring.com, and other times we set up toys they’ve been ignoring for a while in fun ways so they’re enticed into playing with them. Hello, sleep-ins until 6am (sigh).

My five-year-old sleeps through the night, so a sleep reward chart is useless for her. Instead, I drew up a chart of all the morning tasks she needs to accomplish before leaving for school, such as eating breakfast, getting dressed, brushing her teeth, and so on. It includes words and drawings so that she can easily refer to it herself.

If she gets all the tasks done, she gets a star. Her little sisters also have morning task charts – they don’t even get stars for them, but they do their tasks anyway because they want to be like their big sis!

Throw any old costumes and accessories (such as masks, wands and capes) into a big box. Hide it away and take it out when they’re all losing their nuts. From whingers to superheroes in a flash!

Let your little ones dig old milk bottles, egg cartons, jars, containers and lids out of the recycling bin for crafts. Add some sticks, leaves, rocks and feathers for a natural element. All you need are some scissors and glue sticks from the discount shop and Bob’s your uncle!