Before I had kids, I was dumbfounded by the barely contained chaos that reigned in my friend’s three-kid household. There were always teetering piles of craft supplies on every flat surface, a mountain of washing the size of Everest, and an excruciating noise level that made me want to cover my ears with my hands. I won’t lie – going to her house made me anxious.

Fast-forward five years and her house seems like a day spa. That’s because my home has become a zoo filled with shrieking, wild animals. I went and had three kids in two-and-a-half years (not by choice – I had twins!), and now I’m the one handing out panic attacks to my friends, along with large glasses of wine when they come over.

I had no clue back then what life was like with three young children. It’s nuts. Insane. A madhouse every single day.

Here are ten things that would shock you if you popped over to my place unannounced (please don’t).

My three-year-old twins change undies about five times a day (they love to dress up and they annoyingly insist on changing their undies every time too), so they need about 20 pairs each. My five-year-old has somehow accumulated that many pairs as well. Husbo about the same. Me? Hey, I’ve got the cute kind, the sexy kind, the grandma kind and everything in between. Let’s say 30. BOOM! We’re in the double digits.

One day when the twins were babies, I had a sleep-deprived meltdown to my husband. “I feel like I’m always cutting someone’s nails!” I wailed. Then I did the math. 10 fingernails + 10 toenails x 5 family members = 100 nails! OK, I technically don’t cut my husband’s, but I still feel responsible for harassing him to cut them. And then there’s the cat’s 28 claws. Is it just me or are these numbers in the realm of the absurd? It’s too much for one person to handle.

We do one big shop that costs about $250 and another shop at about $100, and then we buy other small bits throughout the week. Some weeks we’d probably be spending upwards of $500. Yikes, right? 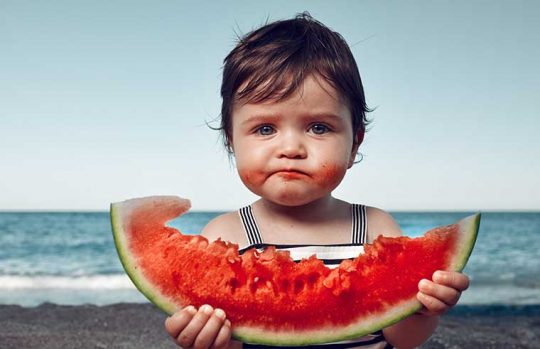 My children are fruit bats. They’ll come up to me about 14 times a day with their puppy dog eyes and beg, “Muuuum, I’m huuuungry, can I have a piece of fruit?” I often have to convince them to eat something that’s more filling because otherwise, they’ll be at my feet again five minutes later. Despite my attempt to limit their consumption, we fill two big-ass bowls of fruit two to three times a week – and that doesn’t even count the fruit that lives in the fridge. I estimate we go through about 91 pieces of fruit a week.

5. We sweep the floor three times a day and fill the dustpan every time

This is one of my biggest complaints. I’ll spend an hour vacuuming the house, and then five minutes later I’ll walk into our dining area and find the floor covered with food, scraps of paper and random bits of rubbish. How do they DO it so quickly?! I’ll never know.

6. Someone is ALWAYS yelling at someone else

Having three girls so close in age means that even the smallest thing is grounds for competition and conflict. Santa brought them three different presents? They’ll fight over them like cats in heat. Santa decided to learn from his mistakes and bring them three identical presents? They’ll find the tiniest detail that’s “better” about one of them and screech for ownership of that one. One of them found a “treasure” (aka a broken piece of plastic) at the park? Screamfest. Interesting speck of dust in the corner of the room? Shriek central. The neighbours must be planning to move to Micronesia.

7. All our kids sleep in the same room (even though we have enough rooms for everyone)

We used to have our three girls in separate rooms, and then we trialled various combos of two girls together and one girl on her own. Bedtime was a nightmare that involved running from one screaming child’s room to another (they all want Mum or Dad and they want us NOW). So, we decided to chuck them all in the same room and turn the other rooms into a spare bedroom and a playroom. Bedtime is still a torturous ordeal, but at least it’s contained and I can sit in one spot to weep.

8. There’s no such thing as “sleeping through the night”

Our family is a walking contraceptive ad, controlling the Earth’s population one screaming match at a time.