A US mum has flagged this serious issue for parents using mirrors in the back of their cars so they can see their babies.

Amanda DeAngelis was using one of those popular mirrors that straps to the vehicle’s seat and gives parents a view of their baby as they’re driving. She’s used this mirror with her previous children, but on this particular day it didn’t end well.

Amanda made a brief stop and went to unbuckle her (rear-facing) baby when she smelled smoke – and then saw smoke. She got her baby out of the car quickly and filmed what was going on, as a warning to other parents.

“Saw the smoke coming up”

“This is my baby’s car seat. Smoking,” Amanda says in the clip. “Because there is a mirror on the back of the seat so I can see her. And I just took her out of the seat and smelled smoke and saw the smoke coming up, and this is caused by the sun’s reflection into the car seat. Thank god I made a two second stop and found this before something happened.”

She uploaded the footage to Facebook with a couple of other photos, explaining she got straight in touch with the manufacturers of the mirror – and the car seat – after the incident to notify them about what happened.

“Only me! This happened today,” the post caption reads. “Thank God! I was rushing home and didn’t sit in my seat checking emails and responding to texts like I typically do when Mila is sleeping. I’ve used car seats with mirrors with all my kids — never have I experienced this.”

Amanda says the car seat manufacturer responded to her quickly when she told them about this dangerous product combination. The mirror manufacturer had not spoken to her, as yet.

Are these baby mirrors safe?

We dug a little deeper into this practice of using these sorts of mirror accessories inside vehicles. Here’s what we found out:

Britax (who make the car seat Amanda used) have their own mirror accessory which securely attaches to the top of the vehicle headrest, rather than low down on the seat, where Amanda’s mirror was.

This higher placement means the mirror doesn’t reflect the sun directly onto the seat’s fabric, making it a much safer option. 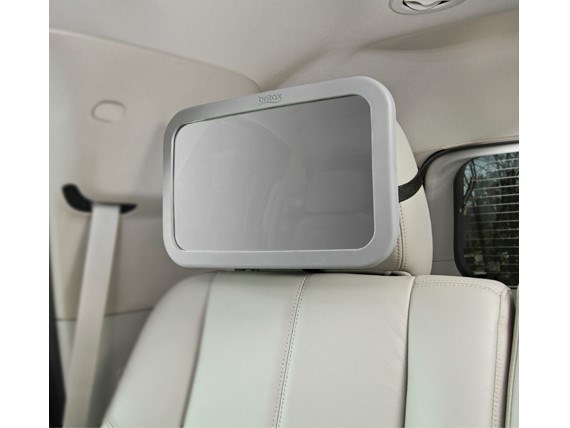 While this case of a mirror igniting a car seat is surely a rarity, there are other dangers associated with these mirrors, and indeed any loose object in a car. Some experts worry these mirrors could detach in the event of a collision, becoming dangerous projectiles and potentially harming passengers in the car.

The ABC reports that “everything from luggage to soda pop cans that were not tied down were responsible for more than 13,000 injuries in accidents nationwide in just one year” (in the US). They detailed a case where a child’s skull was cracked by a flying mobile phone, during a collision.

It’s food for thought, and although a repeat of Amanda’s experience is unlikely, this is an excellent reminder about some other important elements of keeping everyone safe on the road.

Think carefully about if and where you install these mirrors, and make sure any loose bits and bobs in your car (including mobile phones) are properly secured, for optimal safety.